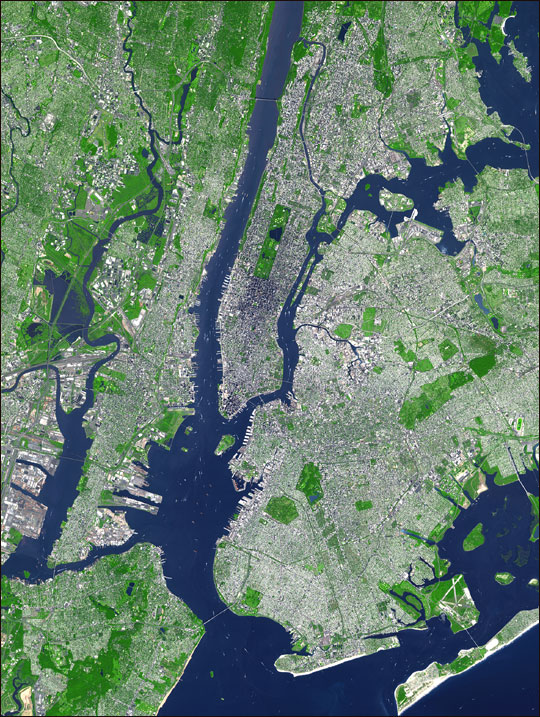 This false-color satellite image shows greater New York City. The Island of Manhattan is jutting southward from top center, bordered by the Hudson River to the west and the East River to the east. (North is straight up in this scene.) In the middle of Manhattan, Central Park appears as a long green rectangle running roughly north-south with a large lake in the middle. Also visible are parts of Staten Island (bottom left corner) and Long Island (lower right).

The area shown is as rich in history as it is in cultural diversity today. Human development in lower Manhattan began as early as 1100 A.D. Native American women farmed the land, growing mainly maize, beans, and squash. The first European explorers, led by Henry Hudson, arrived in New York Harbor in 1609 aboard the Halve Maen. The expedition was commissioned by the Dutch West India Company, which 17 years later bought the island from the Canarsie Indians for the equivalent of $23.70. The Dutch named their new land New Amsterdam and, with its population of 270 residents, the settlement had a fort, houses and farms.

In 1653, the governor had a 9-foot-tall barricade built to keep out potential invaders from the north. The wall failed in its purpose, however, when in 1664 the English attacked the town by sea. (The street upon which this wall was built remains today as the famous Wall Street.)

New York served as the United States’s first capital after the young nation won its independence from the British. George Washington, the first U.S. president, was sworn in at Federal Hall in 1789. Three years later, the first New York Stock Market was organized when twenty-two stockbrokers signed the “Buttonwood Agreement” under a buttonwood tree on Wall Street. The New York Stock and Exchange Board was founded in 1817, and relocated in 1903 to its current location on Broad Street. (Visit Lower Manhattan.info for more details about the city’s developmental timeline.)

This false-color image was acquired on Sept. 8, 2002, by the Advanced Spaceborne Thermal Emission and Reflection Radiometer (ASTER) aboard NASA's Terra satellite. The scene spans an area that is 27 km wide by 37 km tall. Vegetated land surface is green, paved urban areas are a whitish blue, and water is dark blue.