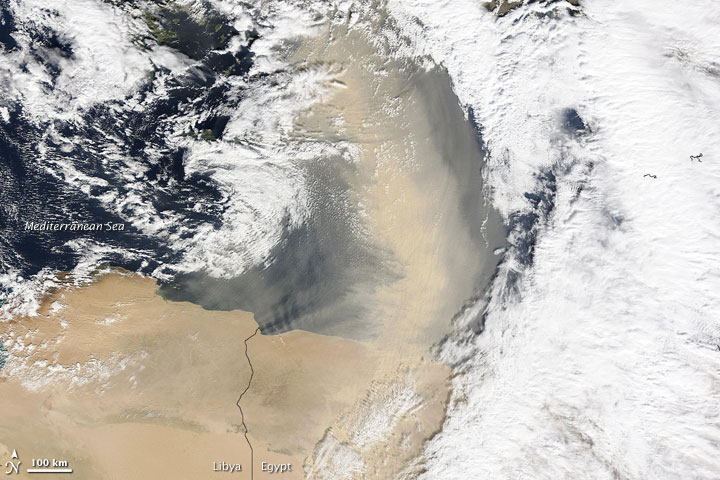 A dust plume several hundred kilometers long blew off the north coast of Egypt and over the Mediterranean Sea on January 23, 2009. The Moderate Resolution Imaging Spectroradiometer (MODIS) on NASA’s Terra satellite took this picture the same day. In this image, a tan plume forms an arc moving in a counter-clockwise direction over the water. To the west, near the Libyan border, the dust is thinner, and it forms crisscrossed wave patterns. Immediately east of the dust plume, a bank of clouds forms an arc that partially encircles the dust plume. These clouds may be associated with the same weather system that stirred the dust.

A great sand sea straddles the border between Egypt and Libya. Forming a giant inverted “V,” the sand sea extends far southward into both countries, and it provides plentiful material for dust storms in the region.

A dust plume several hundred kilometers long blew off the north coast of Egypt and over the Mediterranean Sea in late January 2009.

Dust Plume over the Mediterranean Sea

Dust Plume off the Coast of Northern Africa