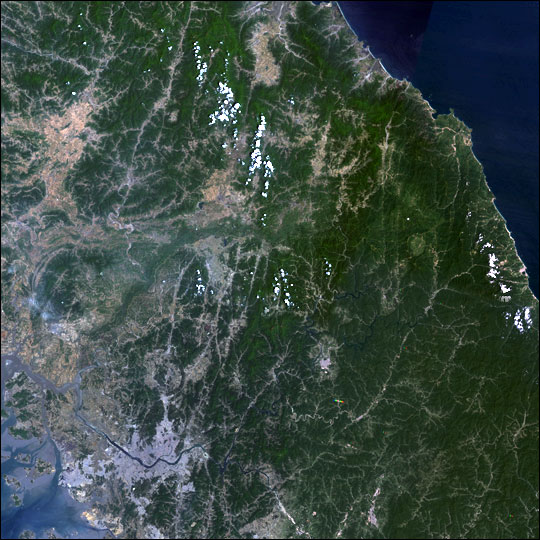 On July 27, 1953, an armistice agreement brought fighting, though not the war itself, to an end in Korea. One legacy of that 50-year-old ceasefire has been the 250-km-long (148-mile) truce line bisecting the Korean Peninsula into northern and southern halves. The armistice provided for a 4-km-wide (2.5-mile) buffer zone running west to east roughly along the 38th parallel. This buffer zone contains river deltas and grasslands toward its western end, but is mostly mountainous terrain in the east.

According to the terms of the armistice, there are no large troop placements in the area and all heavy weapons such as tanks and artillery pieces are banned. A fence marks the center along the Military Demarcation Line (MDL); the wider zone is known as the Demilitarized Zone (DMZ). Recent negotiations between the two sides have allowed for some roads and railroads running through the DMZ to be reconnected. On the southern side, the small village of Daeseong-dong exists with 225 residents who harvest crops on land within the DMZ. Otherwise, the only people in the DMZ are soldiers and observers, with little in the way of permanent settlement or structures.

An interesting and unintended consequence of the armistice is that this swath of land has been protected from urbanization and cultivation for the past 50 years while populations on both sides of the zone have grown tremendously. Among the species making their homes in the DMZ are endangered Asian cranes, black-faced spoonbills, angora goats, Amur leopards, and even bears. These animals have learned to live peacefully under the watchful eyes of soldiers in a land strewn with mines. As the relationship between North and South Korea has relaxed there are plans for development, such as an international trade center and tourism programs that would bring parking lots and other structures into the midst of this critical habitat. Conservationists, anticipating the time when the DMZ might be taken down, are keeping a watchful eye on these events in hopes that much of the area could remain protected as peace parks and wildlife reserves.

Officially, the Siberian Tiger is believed to be locally extinct in South Korea. However, some wildlife watchers have found pug marks in the snow and trees scratched in a manner much like tigers marking territory. Local farmers have reported finding animals mauled by a large predator. The tiger is considered a symbol of unified Korea and confirmed sightings by remotely tripped cameras are a goal with more than just wildlife spotting at stake. It is an intriguing possibility, both symbolically and scientifically. While sightings are not yet confirmed, there is some pressure to open the MDL barriers and remove landmines to allow tiger populations in the North and South to intermingle to preserve genetic diversity. The current unconfirmed estimate puts the southern population of tigers at perhaps ten animals. Little is known about the extent of wildlife populations to the north, due to political isolation and the inability of scientists to explore in the border regions north of the MDL.

The Landsat imagery shown above is a mosaic of natural-color data (TM bands 3, 2, and 1) from four different acquisitions of the central part of the Korean Peninsula by the Landsats 4 & 5 satellites. The imagery spans from 1989 through 1991 and has been merged to create a nearly seamless image across the full length of the DMZ. The zone appears quite clear in the western half where it stands out as the wide green swath through the countryside where cultivation on either side of the zone leaves the ground more barren and brownish in color. The bright grey region on the coastal area south of the DMZ and on the western side of the country is South Korea’s capital city, Seoul. The complex patterns of sedimentation in the mouth of the Han River are quite striking in the image’s southwestern (lower left) corner.