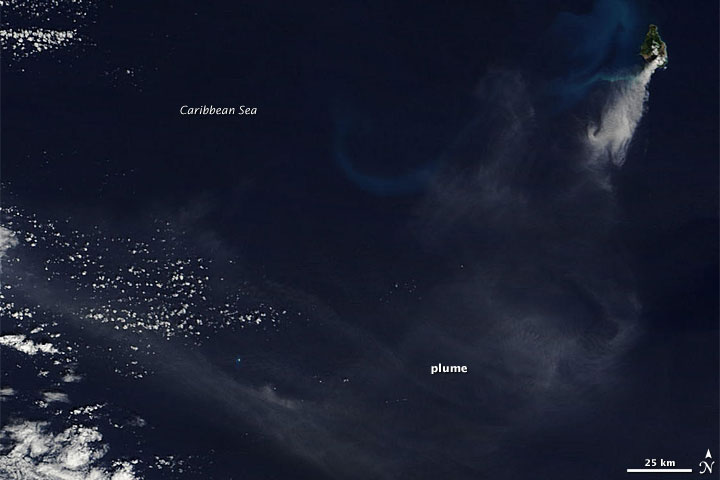 Activity continued on the Soufriere Hills Volcano through the end of 2008. The Moderate Resolution Imaging Spectroradiometer (MODIS) on NASA’s Terra satellite captured this image of the volcano, on the Caribbean island of Montserrat, on December 30, 2008. As in earlier images, the volcanic plume is most intense near the volcano then thins out farther away from the island. In this image, a thick plume blows south-southwest from the summit, and south of that, a much thinner plume curves around to the west, eventually mixing with clouds.

On December 30, 2008, the same day this image was acquired, the U.S. Air Force Weather Agency reported that an ash plume had traveled roughly 85 kilometers (45 nautical miles) south-southwest of the summit, and residual ash had traveled some 325 kilometers (175 nautical miles) west-southwest. The Montserrat Volcano Observatory’s weekly bulletin for December 19-26, 2008, reported pyroclastic flows—avalanches of scorching gas, rocks, and debris—at Tyers (or Tyres) Ghaut, a tributary of Belham Valley, on the side of Soufriere Hills Volcano. The report also described sulfur dioxide emissions, although at a lower rate than in the previous week.

Soufriere Hills is a stratovolcano composed of alternating layers of hardened lava, solidified ash, and rocks ejected by previous eruptions. In 1995, a series of major eruptions from this volcano eventually destroyed the island’s capital city, Plymouth. After an explosive eruption in early December 2008, the volcano continually released plumes through the end of the year.

Activity continued on the Soufriere Hills Volcano through the end of 2008, including pyroclastic flows and ash plumes.

The Soufriere Hills volcano on the Caribbean island of Montserrat continued releasing ash and steam in mid-December 2008.