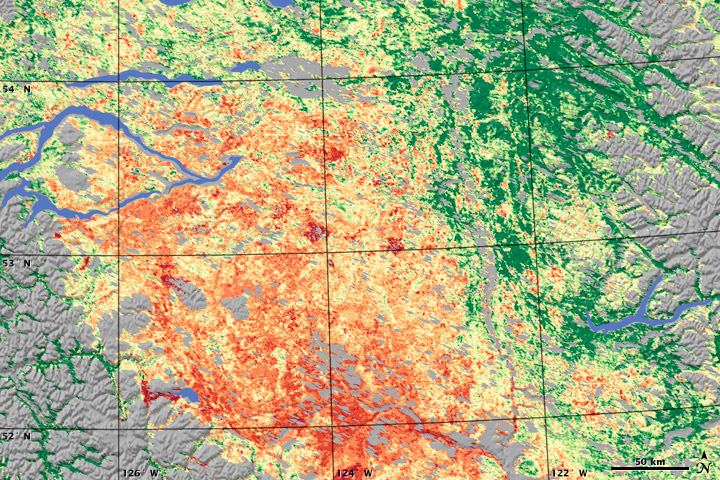 Beginning in the 1990s, British Columbia’s forests were increasingly plagued by a population explosion of mountain pine beetles. This beetle, Dendroctonus ponderosae, destroyed large tracts of forest in the province. Such widespread forest loss affects more than just the scenery. Forests have economic value, and they provide habitat and food for wildlife. In addition, they play an important role in Earth’s carbon cycle, which affects climate. Healthy, growing forests take up carbon dioxide and produce oxygen. Dead forests produce carbon dioxide when trees decay. Being able to map the location and severity of pine beetle and other insect infestations is a crucial task for forest managers and biologists.

As the size of the pine beetle infestation grew, forest managers needed a technique to identify damage over increasingly large areas: an ideal task for satellites. Relying on a variety of data sources, including observations by NASA’s Moderate Resolution Imaging Spectroradiometer (MODIS), Jon Ranson and Paul Montesano of NASA’s Goddard Space Flight Center conducted a survey of insect-damaged forests in British Columbia. This image shows their assessment of insect damage overlain on a topography map. In this image, red indicates the most severe damage, and green indicates no damage. Gray indicates non-forested areas.

MODIS observes various wavelengths of reflected light and heat coming from the surface of the Earth, which allows scientists to estimate how dense and healthy vegetation is; where trees have lost their moisture-rich, green needles; and where fires have occurred. Ranson and Montesano combined MODIS data, aerial overview surveys conducted from 2003 to 2006, and information about fires in the region. The researchers produced a damage index for forests severely affected by the infestation and relatively healthy forests. In areas of severely affected forest, the study found a high level of agreement between the damage estimated by this approach and damage observed by aerial overview surveys. The satellite-based technique also spotted damage in less severely affected areas. Ranson and Montesano hoped this approach would enable forest managers to spot new outbreaks of the infestation.

Assessments of pine beetle and other insect infestations are part of a larger study of boreal forests’ relationship with our planet’s carbon cycle. In an interview with EarthSky, Ranson discusses his studies of forests in Canada and Siberia.

NASA map by Robert Simmon, based on data from Paul Montesano, Jon Ranson, and the MODIS land team. Caption by Michon Scott and Rebecca Lindsey.