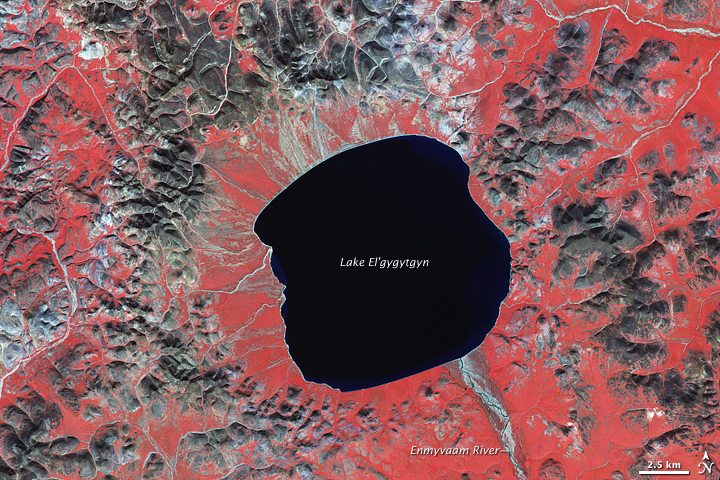 Glaciologists have long agreed that many of the first visible signs of global warming would appear in Earth’s frozen regions. This knowledge has focused attention on the polar regions and how they might change in the near future. To understand how the physical and ecological conditions at high latitudes might change, scientists must understand how the current conditions developed. Detailed records of climate change over the past few million years, however, are sparse, in part because the landscape has been repeatedly scoured by massive ice sheets.

One area that offers a glimpse into the Arctic’s distant past is the lake bed below Lake El’gygytgyn. Lying some 100 kilometers (60 miles) north of the Arctic Circle in eastern Russia, Lake El’gygytgyn rests inside an impact crater. The Advanced Spaceborne Thermal Emission and Reflection Radiometer (ASTER) on NASA’s Terra satellite took this picture of the crater and its surroundings on August 18, 2008. In this false-color image, red indicates vegetation, gray-brown indicates bare land, and deep blue indicates water. The vegetation is Arctic tundra, with low-lying plants that have short growing seasons. A network of naked ridges and vegetated valleys surround the crater lake, and just one river exits the lake, the Enmyvaam (or Enmivaam) River.

The El’gygytgyn crater results from a 3.6-million-year-old meteorite impact. About 15 kilometers (9 miles) across, the crater is surrounded by an uplifted ridge some 18 kilometers (11 miles) across. Outside the crater, the land slopes gently, but inside the crater, walls descend steeply to a fairly flat-bottomed bowl, now filled by Lake El’gygytgyn. Because the meteorite impact occurred in a region of the Arctic that escaped widespread glaciation during the Pleistocene Ice Age, the rocks in this area survived intact. As a result, the lake bed sediments contain a continuous record of past Arctic conditions, all the way back to the meteorite impact, making them extremely valuable to paleoclimate researchers.

By examining chemical compositions of cores extracted from lake bed sediments, scientists can piece together past climatic conditions of a given region. In November 2008, a drilling project began at Lake El’gygytgyn, and drilling was expected to continue through the spring of 2009. The project’s ultimate goal was to use the lake bed cores to assemble the longest continuous record of climate change in the terrestrial Arctic and to compare that record to records extracted from lower latitudes.