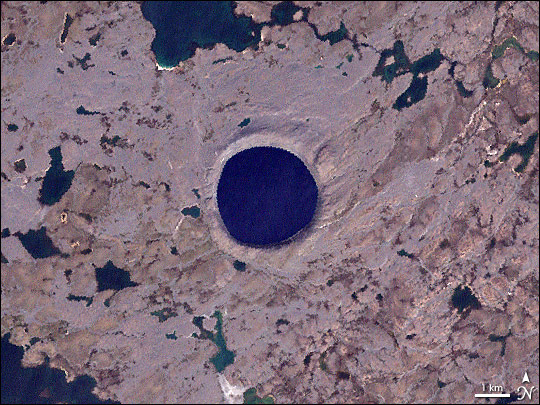 In 1943, the crew of a United States Army Air Force plane noticed a crater in northern Quebec, Canada. The crater’s remoteness prevented a geologic expedition until the 1950s, but once they were able to collect data from the site, geologists concluded that the structure was a meteorite crater produced from an impact roughly 1.4 million years ago. Named Pingualuit Crater in 1999, this crater’s identification eventually led to the identification of more than 20 other impact structures in eastern Canada. It has also provided useful information about climate changes during the last ice age.

NASA’s Landsat 7 satellite captured this image of Pingualuit Crater on August 17, 2002. In this image, water appears blue, and land appears in varying shades of beige. The high latitude of the area limits vegetation, so thick, lush forests do not flourish in this region. In fact, the crater’s name derives from an Inuktitut term for cold-weather-induced skin blemishes.

With a diameter of 3.44 kilometers (2.14 miles), Pingualuit Crater holds a lake about 267 meters (876 feet) deep. Because this lake has no connection to any other water body, inflows from other lakes cannot contaminate Pingualuit’s sediments. Beyond that, the sediments in this crater lake escaped being scoured away by glaciers during the Pleistocene Ice Age. So while sediment deposits in other water bodies in the area do not extend farther back in time than the last ice age, deep sediments in Pingualuit Crater preserve a longer record.

Recognizing Pingualuit Crater’s unique characteristics, an international research team collected samples of the lake’s sediments, paying special attention to diatoms. Communities of these single-celled, silica-shelled algae change in response to environmental changes, including changes in climate. Deep within the crater’s lake sediments, the research team found two separate layers of diatoms and other organic material that indicate they were created during relatively warm conditions. The layers probably dated back before the Holocene Epoch—the geologic time period that covers Earth’s history since the end of the Pleistocene Ice Age about 10,000 years ago. In short, the team’s findings suggested that at two different times before the Holocene Epoch, the area around Pingualuit Crater enjoyed ice-free conditions.