Chlorophyll in the Gulf of Tonkin 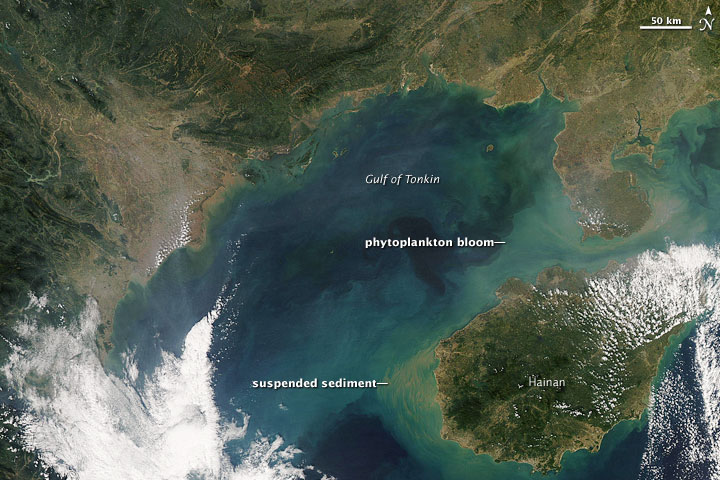 During the Northern Hemisphere winter, monsoon winds over southern Asia and Australia stir the waters of the Gulf of Tonkin, off mainland China’s southeastern coast. Nutrients from deeper, colder waters ascend to the surface, giving rise to blooms of phytoplankton—microscopic plant-like organisms. Like all photosynthesizing organisms, phytoplankton are rich in chlorophyll, and some phytoplankton blooms are big and bright enough to be seen from space.

On December 2, 2008, the Moderate Resolution Imaging Spectroradiometer (MODIS) on NASA’s Aqua satellite captured this image of the Gulf of Tonkin. Just as cream forms pale swirls in a cup of coffee, chlorophyll-rich waters form swirls of relatively light color in this gulf. Besides phytoplankton, suspended sediments also color the ocean waters, particularly off the western coast of Hainan.

A phytoplankton bloom colored the Gulf of Tonkin iridescent green in early December 2008.