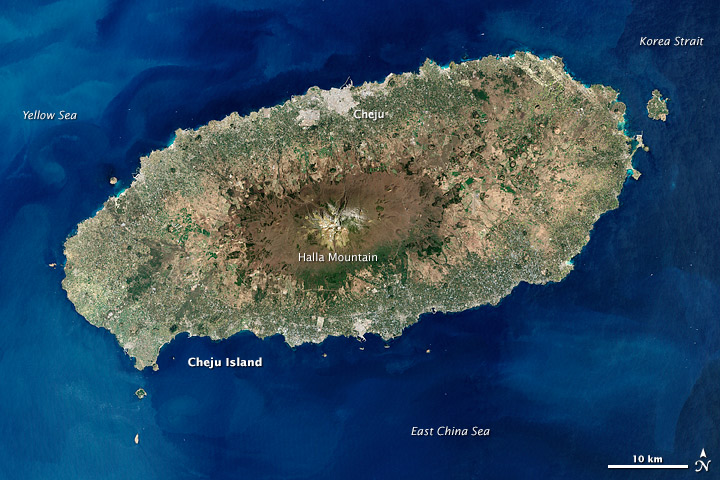 Cheju Island, alternately known as Chejudo or Jejudo, is an oval-shaped volcanic landmass covering 1,845 square kilometers (712 square miles) off the southern tip of the Korean Peninsula. Geologists estimate the island’s age at 2 million years, and archaeological finds suggest that people have lived on the island since prehistoric times. Today, Cheju is both a tourist attraction and home to a United Nations Educational, Scientific and Cultural Organization (UNESCO) World Heritage site.

The Enhanced Thematic Mapper Plus on NASA’s Landsat 7 satellite captured this image of Cheju Island on April 6, 2000. In this photo-like image, cloudless skies allow a clear view of the island and the swirling blue hues of the surrounding waters. Urbanized areas, such as the capital city, Cheju, appear in shades of gray-beige along the island’s perimeter. Inland, a combination of natural vegetation, cultivated fields, and bare ground creates a patchwork of tan and green. The island’s dominant feature is Halla Mountain, a volcano whose last recorded eruption occurred in the year 1007.

Halla Mountain is a shield volcano with a low, broad profile resembling an ancient warrior shield. It is one of the world’s few shield volcanoes located over a magma “hotspot” on a stationary plate of continental crust. Rising to a height of 1,950 meters (6,398 feet), Halla Mountain is the highest peak in South Korea, and the volcano’s crater holds a natural lake and numerous waterfalls. Lava tubes from the volcano have formed a network of caves complete with lava walls with carbonate rock formations. The rarity of these features combined with their instructiveness about volcanic processes has earned the site its World Heritage status.

Cheju Island is an oval-shaped volcanic landmass off the southern tip of the Korean Peninsula. The island’s dominant feature is Halla Mountain, a volcano that has been dormant since the early eleventh century.