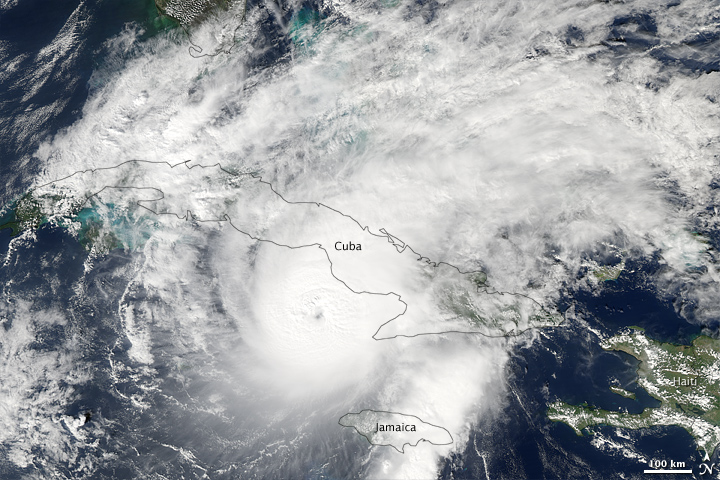 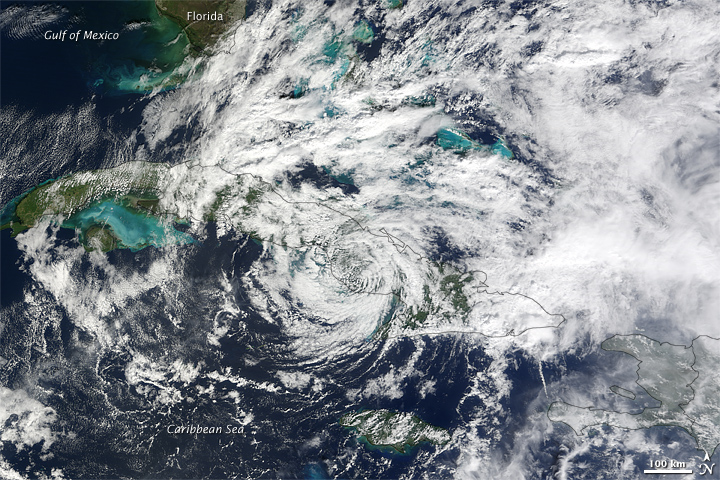 On November 8, 2008, Hurricane Paloma ballooned into an extremely dangerous Category 4 hurricane with sustained winds of 230 kilometers per hour (145 miles per hour) and stronger gusts. The Moderate Resolution Imaging Spectroradiometer (MODIS) on NASA’s Aqua satellite captured the top image of the storm at 1:35 p.m. Eastern Standard Time, while the Category 4 storm was still strengthening. In this image, the storm is compact and dense, with a small eye. The outer bands of the storm were already over central Cuba.

Paloma came ashore over Santa Cruz del Sur, Cuba, shortly after 6:00 p.m. EST on November 8, according to the National Hurricane Center. While the storm had weakened into a Category 3 storm, it still slammed the island nation with winds near 200 km/hr (125 mph). The storm destroyed homes and other buildings and caused floods, but the government reported no deaths, said the Associated Press. Cuba was still recovering from being hit by two powerful hurricanes, Gustav and Ike, earlier in the summer.

By November 9, Paloma had weakened considerably over Cuba. When Aqua MODIS captured the lower image at 2:15 p.m. on November 9, the storm was degrading from a tropical storm to a tropical depression. Only the faintest hint of a powerful storm remains in the loosely swirling clouds over Cuba. According to the National Hurricane Center, the storm dissipated on November 10.

A late-season storm, Paloma developed as a tropical depression in the Caribbean off the coast of Honduras and Nicaragua on November 5, 2008, and became a hurricane the following day.