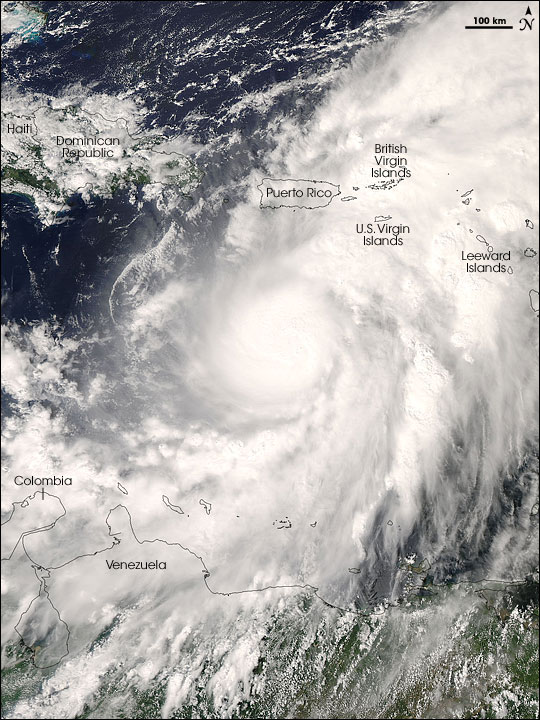 By mid-October 2008, when Caribbean Islands such as Haiti, the Dominican Republic, and Cuba had already been battered by Hurricanes Gustav and Ike, even more destruction appeared headed their way. By afternoon of October 15, 2008, Hurricane Omar seemed poised to strike. Classified as a Category 1 hurricane at that time, the storm was strengthening at it moved toward the northeast. A hurricane watch was in effect for Puerto Rico, and a hurricane warning had been issued for the Virgin Islands and the northern Leeward Islands.

The Moderate Resolution Imaging Spectroradiometer (MODIS) on NASA’s Aqua satellite captured this image at 1:45 p.m. local time (17:45 UTC) on October 15, 2008. In this image, the storm more than covers the expanse of ocean between the northern coasts of Colombia and Venezuela, and Puerto Rico. The clouds extend toward the northeast, well past the string of Caribbean Islands east of Puerto Rico. A report issued 15 minutes later by the U.S. National Hurricane Center stated that the center of the storm was about 330 kilometers (205 miles) San Juan, Puerto Rico. The report also stated that storm had maximum sustained winds near 140 kilometers (85 miles) per hour, and would likely strengthen to a Category 2 hurricane by the time it reached the northern Leeward Islands.

Omar actually reached a Category 3 hurricane status, but fortunately for residents of the islands in the storm’s path, it soon weakened and headed for the Atlantic. On October 16, the National Hurricane Center reported that the storm was rapidly weakening, but the trailing side of the storm could produce several inches of rain in Puerto Rico and neighboring islands.