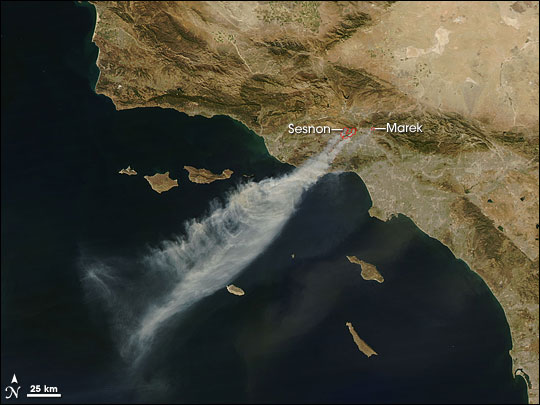 Driven by powerful Santa Ana winds, wildfires raged near Los Angeles, California, in mid-October 2008. Not only did the winds fan the fires’ flames, they also sent the smoke far out to sea. The Moderate Resolution Imaging Spectroradiometer (MODIS) on NASA’s Aqua satellite took this picture at 2:20 p.m. local time (21:20 UTC) on October 13, 2008. In this image, an opaque plume of smoke fans out as it blows over the Pacific Ocean, past the Channel Islands. Counter-clockwise swirls of smoke within the plume suggest shifting wind directions as the smoke moves westward. Further evidence of the Santa Ana winds’ strength appears in the south, where a faint plume of dust mimics the smoke plume’s general movement.

According to the report from the National Interagency Fire Center issued on the morning of October 14, 2008, the Sesnon fire was located 11 kilometers (7 miles) northeast of Simi Valley, while the Marek fire was located 8 kilometers (5 miles) east of San Fernando. Both fires threatened numerous structures and forced evacuations. According to the U.S. National Weather Service, strong winds were expected to continue in the area through the evening of October 15.

CNN reported that, as of October 14, at least two people had died, and the wildfires had burned more than 10,000 acres (40.5 square kilometers) in the hills of Los Angeles and Ventura counties. The Sesnon fire had charred more than 5,000 acres, and burned 19 structures. The Marek fire had scorched 5,300 acres and destroyed 30 mobile homes. More than 800 firefighters battled the Sesnon blaze, while almost 1,300 firefighters fought the Marek fire. As of October 14, the cause of neither fire was known.

As the smoke from this fire makes clear, surface winds do not always blow in the same direction as those at higher altitudes.