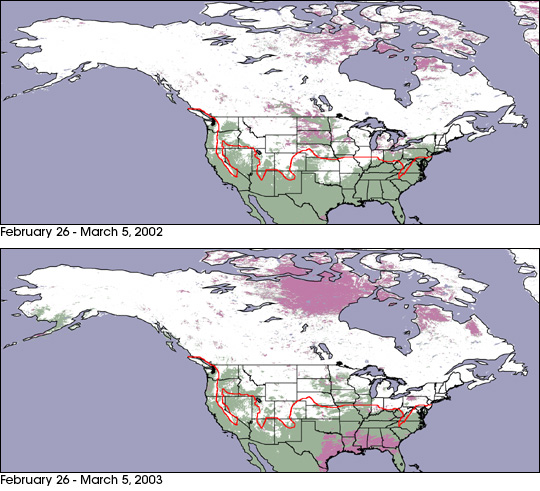 In California’s Sierra Nevada Mountains and North Carolina’s Outer Banks, Old Man Winter left a heavier-than-usual footprint this year. And yet his passing left scarcely a trace in many western states, until recently.

The winter of 2002-03 saw a number of extreme weather events across North America, some that made history. There were record snow accumulations in parts of the mid-Atlantic and New England regions of the United States. Other areas, such as southern Alaska, received unusually low accumulation. Many western states, such as Colorado, saw precious little snowfall this winter, which heightened concerns for an impending summertime drought and a fire season possibly as severe as last year’s—that is until March 18, when one of the worst blizzards in Colorado’s history dumped as much as 7 feet (2.1 meters) of snow on some areas. Denver received about 30 inches. (Click to see an image of Colorado shortly after the snowstorm.)

The maps of North America above show snow cover extent for 2003 (bottom) as compared to 2002 (top). Both maps were produced using data from the Moderate Resolution Imaging Spectroradiometer (MODIS), aboard NASA’s Terra satellite, collected over the same 8-day period beginning February 26. In these images, the areas covered by snow are colored white, the bare land surface is green, those regions obstructed by clouds appear as purple, and water is blue. The red line overlying both maps represents the average snow extent for this time of year, produced from a 30-year data set provided by NOAA.

Particularly striking in the map of 2003 is the snow extent across the New England region. Notice that there is significantly more snow cover this winter as compared to last. Conversely, in 2002, Alaska was almost completely covered by snow in 2002, and yet in 2003 we see large areas of mostly bare land surface in the southern part of the state.