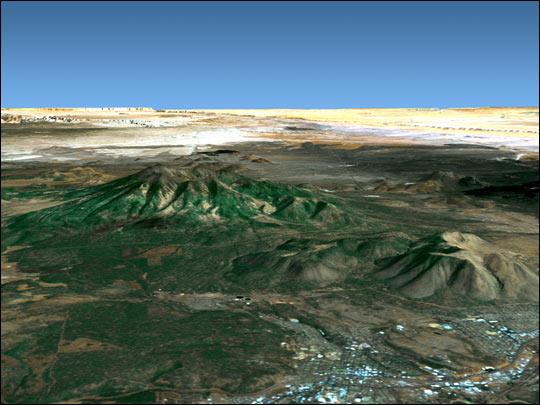 Towering above the Colorado Plateau to a height of more than 12,000 feet and visible from as much as 100 miles away, the San Francisco Peaks are believed to be the remnants of a large compound stratovolcano. Located due north of the Plateau’s largest city, Flagstaff, Arizona, an aquifer within the caldera supplies much of the city’s water while the mountain itself is the site of much outdoor recreation.

Historically considered the Navajo’s Sacred Mountain of the West, herbal medicines have long been gathered in the high mountain peaks. The diverse vegetation of the peaks gave origin to C. Hart Merriam’s Life Zone theory, which describes the altitudinal zonation of both vegetation and animal species.

This perspective image was created by draping Landsat 7 imagery over a digital elevation model; the viewer is looking towards the northeast. The image is a combination of the red, green and near infrared, and blue bands of Landsat 7’s Enhanced Thematic Mapper plus instrument. The Landsat image was acquired on July 28, 2002. The lip of the Grand Canyon can be seen behind the peaks.

Image by Jesse Allen and Laura Rocchio, based on data supplied by the Landsat Project Science Office.