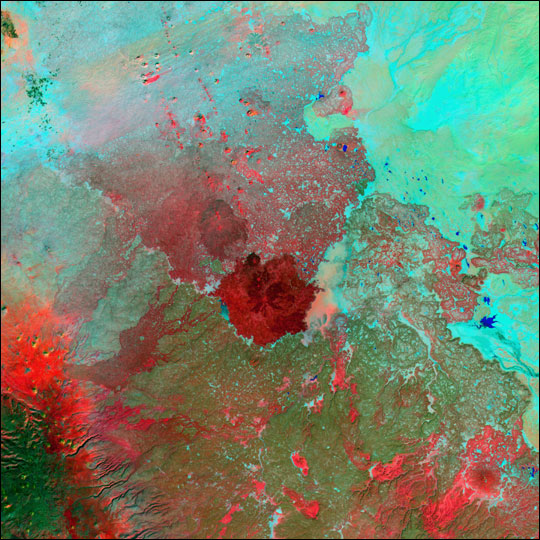 Between the fertile land along the Mediterranean Sea in the west and the Euphrates River hundreds of miles to the east, the lava fields of the Syrian Desert bake under the sun. The desert reaches from southern Syria (shown), southward into northern Jordan and eastward all the way to the Euphrates River in Iraq. This image is roughly centered on the southern end of the Syrian Desert’s As Safa lava fields southeast of the city of Damascus.

The image uses thermal radiation detected by Landsat to indicate the hottest terrain in the scene, which appears bright red. These areas likely correspond to dark, barren, basaltic lava. Cooler terrain, perhaps covered with thin, scrubby vegetation, is bluish green, and pockets of more lush vegetation in oases and towns are bright green (upper left). A number of cinder cones are scattered throughout the northern part of the As Safa to the north-northwest of the large lava field in the center of the image. At the right of the image, small pools of water are colored bright blue.

This image was acquired by Landsat 7’s Enhanced Thematic Mapper plus (ETM+) sensor on June 11, 2000. This is an unusual false-color composite image made using the thermal, infrared, and green wavelengths; the thermal band is not often shown in Landsat imagery.

Image provided by the USGS EROS Data Center Satellite Systems Branch. This image is part of the Landsat Earth as Art series.