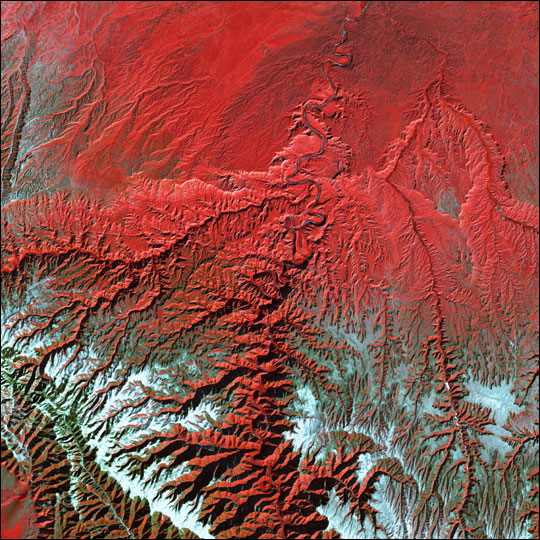 Utah’s Green River cuts across the Tavaputs Plateau (top) before entering rugged Desolation Canyon (center), which cuts southward through first the Roan and then the Book Cliffs — two long, staircase-like escarpments that run west-east from Utah into Colorado. Desolation Canyon, seen in the center of this image, was named by the famous American explorer John Wesley Powell, for its intimidating, rugged terrain. Eighty miles long and nearly as deep as the Grand Canyon, it is one of the largest unprotected wilderness areas in the West.

This image shows the Green River cutting a path through the vegetation of the Plateau. The river appears blue while the vegetation is red. Snow dusts the peaks of the Roan Cliffs, which appears light blue to white.

This image was acquired by Landsat 7’s Enhanced Thematic Mapper plus (ETM+) sensor on December 31, 2000. This is a false-color composite image made using near-infrared, red, and green wavelengths. The image has also been sharpened using the sensor’s panchromatic band.

Image provided by the USGS EROS Data Center Satellite Systems Branch. This image is part of the ongoing Landsat Earth as Art series.