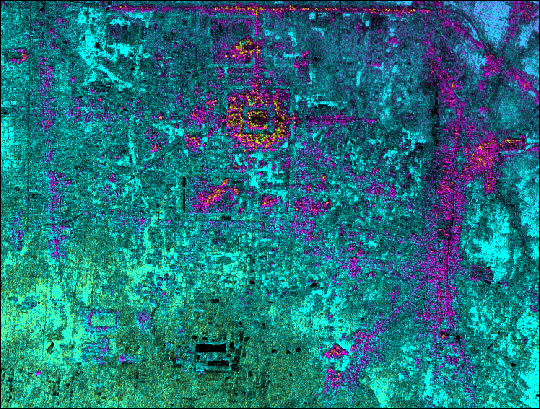 Hariharalaya, the ancient 9th Century A.D. capitol of the Khmer in Cambodia, is shown in the upper center portion of this NASA Airborne Synthetic Aperture Radar (AIRSAR) image. The image was acquired during the 1996 PACRIM mission with AIRSAR operating in the TOPSAR mode. At the center of the image is the terraced sandstone temple mountain of the King Indravarman, the Bakong. The smaller enclosed rectangular feature just to the north is Preah Ko. Further to the south are more rectangular features, temples and water reservoirs attributed to other kings in the earlier part of the 9th Century A.D. and maybe even earlier. Just visible at the top of the image is a long linear feature that forms the southern border of the immense water reservoir, at the center of which is the Lolei temple. The city was the first capitol of the Khmer after the 802 A.D. ceremony consecrating the king as ‘Devaraja’. This is usually translated as ‘god who was king’ or ‘king who was god’. In the next century, the center of power shifted to the northwest, to the area known today as Angkor.

Thus, this early capital is unique both in being the first after the historical founding of the Khmer Empire, and for being inhabited for a relatively short time. Although kings returned from Angkor in the 11th and 12th Centuries A.D. to build the temple known as the Lolei and to construct the tower in the center of Bakong, the city of Hariharalaya remained on the perimeter of royal power. It was revered, however, as part of a longstanding and important custom of ancestral veneration. This manifested itself in a complex set of rituals honoring one’s forebears—also ensuring legitimacy for one’s claim to the throne. So behind this seemingly simple patterning of rectangles on the radar image lies many layers of history, ritual, and meaning for the Khmer people, both past and present.

The dimensions of this scene are approximately 6 by 4.8 kilometers (3.7 by 3 miles) with a pixel spacing of 5 meters (16.4 feet). North is toward the top. Image brightness is from the C-band (5.6 centimeters, or 2.2 inches wavelength) radar backscatter, which is a measure of how much energy the surface reflects back toward the radar. Color is used to represent elevation contours. One cycle of color—from blue to red to yellow to green and back to blue again—represents 10 meters (32.8 feet) of elevation change.

AIRSAR flies aboard a NASA DC-8 airplane based at NASA’s Dryden Flight Research Center, Edwards, Calif. In the TOPSAR mode, AIRSAR collects radar interferometry data from two spatially separated antennas (2.6 meters, or 8.5 feet). Information from the two antennas is used to form radar backscatter imagery and to generate highly accurate elevation data. Built, operated, and managed by JPL, AIRSAR is part of NASA’s Earth Science Enterprise program. JPL is a division of the California Institute of Technology in Pasadena.