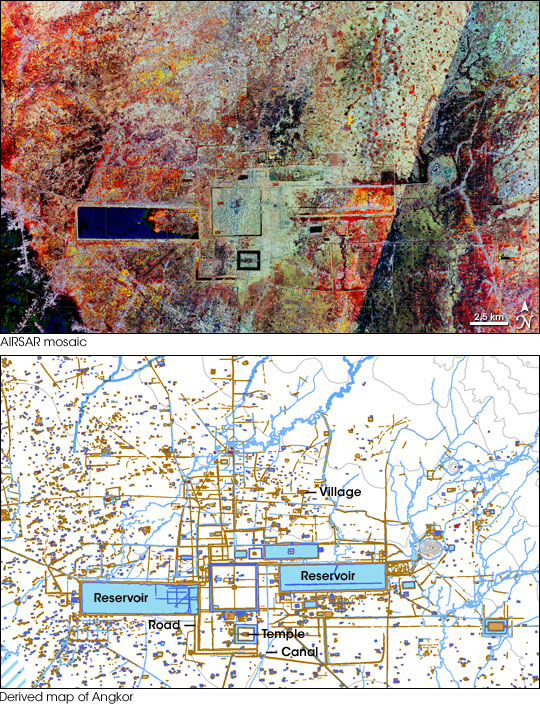 Between the ninth and fifteenth centuries AD, deep in the Cambodian jungle, Angkor thrived as the capital of a powerful empire. By the time European traders found Angkor in the late sixteenth century, however, the site, including the famous Angkor Wat temple, had been largely abandoned. In the centuries that followed, archaeologists have struggled to understand the city and what happened to it. A study published in September 2007 added weight to the 1950s hypothesis of Bernard-Philippe Groslier that the medieval city had been built for irrigation, especially to counter the region’s unpredictable monsoons, and that it had supported a human population in excess of one million. According to the new study, the Angkor site is the largest pre-industrial city so far known.

The 2007 study used satellite images, aircraft-based radar data, conventional aerial photography, and ground observations to analyze an area of 2,848 square kilometers (1,100 square miles). The top image is a mosaic of observations collected by the Airborne Synthetic Aperture Radar (AIRSAR) between 2000 and 2007. The bottom image is a map derived from airborne data sources and earlier archaeological maps.

A radar doesn’t work like a camera, so its imagery doesn’t look like a photograph. The radar (mounted on an airplane) sends a pulse of energy down towards the surface, and measures the echo—the signal that the surface scatters back. Different surfaces—water, forests, clearings, buildings—have different echoes. Smooth surfaces tend to be darker (less backscatter), and rough surfaces tend to be brighter (more backscatter). Since radio-frequency energy is invisible, scientists make false-color images in which they use colors to represent different frequencies and intensities of energy.

In the top image, the darker areas indicate low echoes, such as water bodies where the pulse simply bounced off the smooth surface and away from the radar. The largest example is the medieval West Baray reservoir, which continues to hold water today. Forested areas appear much brighter, almost white in places, because the radar pulse is backscattered by multi-layered surfaces, such as branches and leaves. Within these lighter areas, colors take on an additional significance. Red indicates the smallest surfaces, such as grasses and rice fields. Green indicates larger surfaces, such as broader leaves and shrubs. Blue indicates even larger surfaces, such as tree trunks. (Because AIRSAR is a sideways-looking instrument, large vertical objects like tree trunks and walls present the sensor with the largest surface areas.) Within the dotted fields of color, the straight lines and sharp angles of architecture contrast sharply with the surroundings.

The bottom image is a map of the surface features of the ancient city made by scientists from the results of the 2007 study. The researchers described this map as conservative; for a feature to be included, it had to appear in at least two separate data sources, or be verified from the ground or a low-altitude aerial survey. This map reveals an extensive network of linear features. On the flat Angkor plain, elevated linear features might have served as water channels, water barriers, and/or roads, and these features remained visible to radar sensors centuries later. Dwellings and water tanks were spread across some 1,000 square kilometers (385 square miles), connected by roads and canals.

The study published in 2007 concluded that the perimeter of Angkor’s urban complex enclosed roughly 900 to 1,000 square kilometers (350 to 385 square miles)—nearly four times the size of twenty-first century New York City. Angkor was a low-density city, meaning the settlement was spread out over a fairly large area, more closely resembling a modern suburb than an inner city. The Angkor perimeter identified in 2007 established Angkor as the largest pre-industrial city yet known to exist anywhere on Earth, several times the size of the Mayan metropolis of Tikal.

Besides giving a sense of the medieval city’s size, the 2007 study also suggested causes for Angkor’s demise. The extensive water management system built at Angkor enabled its inhabitants to overcome the vicissitudes of nature—for a time. However, those same human-engineered changes to the landscape also created a new set of problems, including deforestation, degradation of the topsoil, and erosion. Evidence of impromptu changes to the water management system, and breaches and failures within the system suggested to archaeologists that the waterways became harder to manage as the years wore on. Although some residents remained after the fifteenth century, they comprised only a tiny remnant of Angkor’s population at its peak.