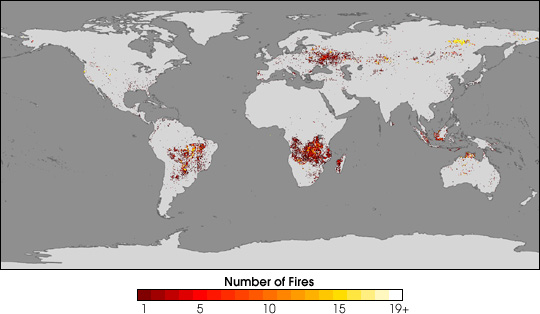 Dramatic new satellite maps showing fire activity across the entire Earth for the past year are providing a unique picture of seasonal and yearly fire activity. The maps are a milestone in the use of satellite data for creating a long-term fire record that is crucial for understanding the impact of fire on life and climate.

Using daily, global fire detection provided by the Moderate Resolution Imaging Spectroradiometer (MODIS) on NASA’s Terra satellite, scientists at Goddard Space Flight Center and the University of Maryland have been mapping fire activity for the entire surface of the Earth every day since February 2000. Never before have scientists had the opportunity to map fire across the entire Earth with such detail, accuracy, and frequency.

Christopher Justice, of the Department of Geography at University of Maryland, is the project’s lead scientist. He says, “Fire plays a central role in the Earth System. It impacts plant and animal habitat, air and water quality, greenhouse gas emissions, and human lives. MODIS’ fire detection capabilities are a big step forward in satellite-based fire mapping. MODIS can detect fires across the entire Earth more accurately than any previous satellite sensor, and it has a higher temperature threshold, which means it can tell the temperature of even very hot fires.” The near-daily global coverage gives scientists an excellent opportunity to study global fire behavior.

The MODIS maps demonstrate the extreme fire seasons seen this year in the US, Australia, and Siberia. The maps also demonstrate fire behavior that would surprise most people, highlighting the contrast between fire size and intensity and frequency. Across the United States, large, intense fires in Western forests attract a lot of attention, but it is the smaller, more numerous fires in the Southeast that dominate the maps. Across the world, the widespread fires that burn each year in the savannas of Africa, Australia, and Brazil dwarf even the most significant fire season in the western United States as far as total acreage and number of fires.

The image above shows fires during August 15–22, 2002. The greatest concentrations of fires are in the Amazon, Southern Africa, and Eastern Europe. In addition, there is a dense concentration of fires in Siberia.

Image by David Olsen, based on data provided by the MODIS Land Team