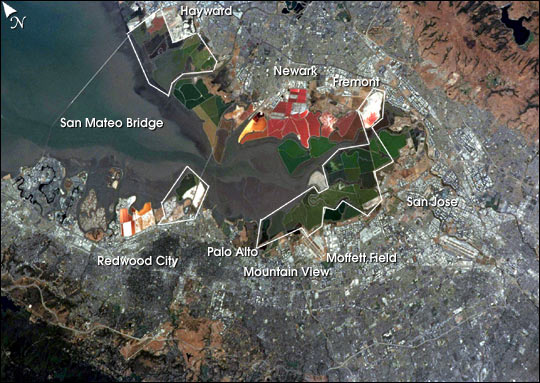 The red and green colors of the salt ponds in South San Francisco Bay are brilliant visual markers for astronauts. The STS-111 crew photographed the bay south of the San Mateo bridge in June, 2002. This photograph is timely because a large number of the salt ponds (more than 16,500 acres) that are owned by Cargill, Inc. will be sold in September for wetlands restoration—a restoration project second in size only to the Florida Everglades project. Rough boundaries of the areas to be restored are outlined on the image.

Over the past century, more than 80% of San Francisco Bay’s wetlands have been filled and developed or diked off for salt mining. San Francisco Bay has supported salt mining since 1854. Cargill has operated most of the bay’s commercial salt ponds since 1978, and had already sold thousands of acres to the State of California and the Don Edwards National Wildlife Refuge. This new transaction will increase San Francisco Bay’s existing tidal wetlands by 50%. The new wetlands, to be managed by the California Department of Fish and Game and the U.S. Fish and Wildlife Service, will join the Don Edwards National Wildlife Refuge, and provide valuable habitat for birds, fish and other wildlife. The wetlands will contribute to better water quality and flood control in the bay, and open up more coastline for public enjoyment.

Astronaut photograph STS111-376-3 was provided by the Earth Sciences and Image Analysis Laboratory at Johnson Space Center. Additional images taken by astronauts and cosmonauts can be viewed at the NASA-JSC Gateway to Astronaut Photography of Earth 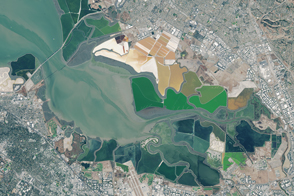