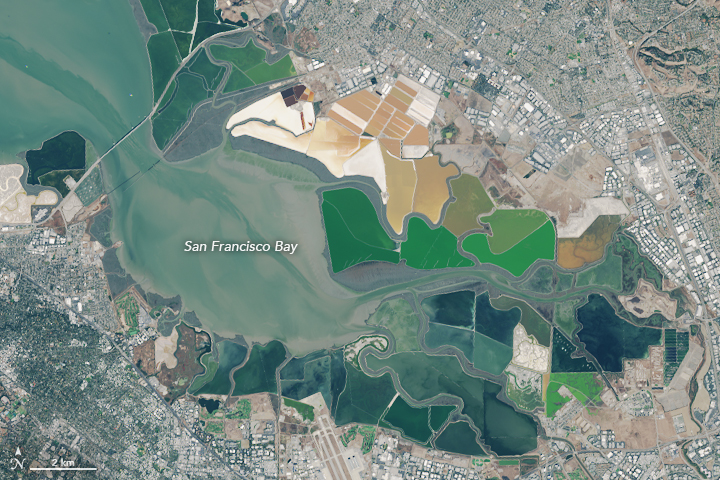 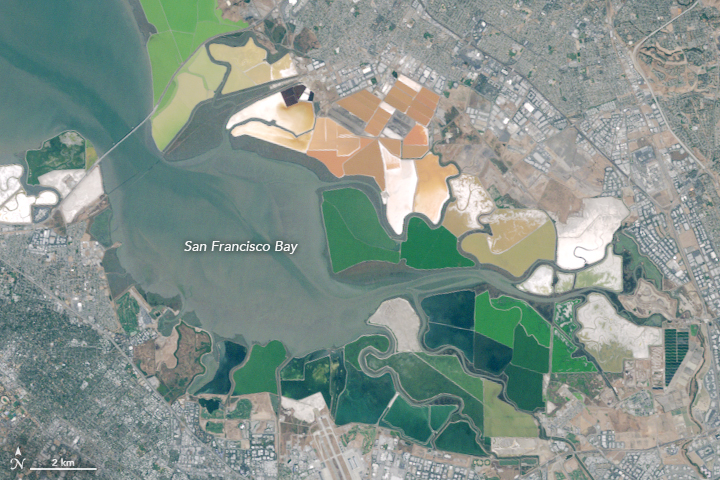 In the south end of San Francisco Bay, researchers and conservationists are working to restore ancient natural history at the same time as they preserve some more recent history. One decade into this fifty-year challenge, the results are impressive.

Before humans started building settlements and cities along the shores of San Francisco Bay, one of the world’s largest estuaries was surrounded by some of the world’s most extensive wetlands. Tidal marshes around the Bay served as natural water filters, with vegetation and shellfish improving the water quality by drawing out nutrients and algae from the sediment-rich water. They were the nurseries and nesting grounds for hundreds of fish, shellfish, and bird species. These marshes also provided a physical line of defense against storm surges and other weather-induced flooding, as well as rising seas. The landscape was a haven for shorebirds and water fowl, salmon and trout, and seals.

However, by the Gold Rush days of the mid-1800s, humans started carving up the shores of San Francisco Bay for salt production. Levees were built, ponds were created, and humans began harvesting salt from the seawater. The industrial-scale operation eventually altered 80 to 85 percent of the original shoreline, providing an economic boost while almost completely remaking the ecosystems. Many species faded from the Bay, though some others found new ways to live amidst the brines and salt flats.

Enter the South Bay Salt Pond Restoration Project, a government and private effort to return most of the shoreline to tidal wetlands and marshlands, while keeping some of the salt-making heritage and landscape. The project began in late 2002 with the passage of legislation and an agreement by salt-production company Cargill Inc. to transfer land to the state of California. A total of 15,100 acres of industrial salt ponds were acquired for restoration and management by the California Department of Fish and Game, the U.S. Fish and Wildlife Service, the U.S. Geological Survey, and the California Coastal Conservancy. The result was one of the largest wetland restoration projects in the United States.

The images above show a landscape under renovation. On October 31, 2015, the Operational Land Imager (OLI) on Landsat 8 captured a natural-color image (top) of the southern end of San Francisco Bay. The second image was acquired on September 9, 2002, by the Thematic Mapper on Landsat 5. Turn on the image comparison tool to see how the South Bay shoreline has changed.

On the far left side of the image, the bright, gypsum-covered salt flats of the Ravenswood Pond Complex (around the Dumbarton Bridge) underwent a sort of hybridized restoration over 13 years. Bay waters were returned to some ponds (turned from white to dark green), while others were left as salt flats because a few species have adapted well to the area in the 160 years of salt production. In one area (just east of the bridge), artificial mounds and miniature islands were constructed to provide critical habitat for some bird species (snowy plovers, American avocets, and black-necked stilts) amidst a landscape that has otherwise been returned to tidal water flows.

Walking around the south side of the Bay (known as the Alviso Pond Complex), old salt evaporation ponds have started changing color from white and tan—or bright green—to darker greens and muddy browns. The brightest areas are flats where salt-encrusted mud was dried out by the air. The shades of green and brown in the various ponds and flats can be attributed to different levels of salinity, different depths of water, and different types of algae and microorganisms thriving in the varied conditions. The darker the shade of green, the closer the water is to the ambient salinity of the Bay. Some areas on the south side, however, remain cordoned off from the Bay as researchers work to manage mercury pollution caused by historic mining operations upstream on the Alviso and Guadalupe Rivers.

On the north side of the images, the bright orange and brown parcels are still being used for salt production. Water is pumped into one area, allowed to evaporate, and then the brines are moved along to the next pond. Through advances in technology, Cargill now uses roughly half as much land to make nearly as much salt as they did before transferring land for conservation.

Restoring the salt marshes of the South Bay has mostly been a process of breaching levees, dredging channels, and then letting the waters of San Francisco Bay flow back into the salt flats and ponds. Nature slowly restores the landscape by sloshing water and sediment on and off the shores in their natural tidal cycles.

The restoration project, which is scheduled to continue for nearly 50 years (if funding continues), has already made a few headlines. Roughly 3,000 acres of salt ponds have been reconnected to the Bay and are returning to natural marsh conditions. Two endangered species, the clapper rail and the salt marsh harvest mouse, have returned to the region. And the bird population in the South Bay area is reported to have doubled from 100,000 in 2002 to 200,000 in 2014.