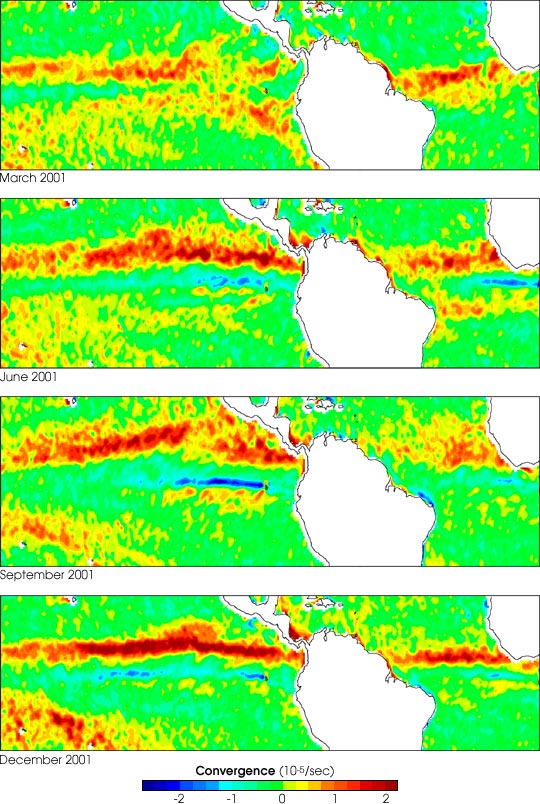 NASA’s QuikSCAT satellite has confirmed a 30-year old largely unproven theory that there are two areas near the equator where the winds converge year after year and drive ocean circulation south of the equator. By analyzing winds, QuikSCAT has found a year-round southern and northern Intertropical Convergence Zone. This find is important to climate modelers and weather forecasters because it provides more detail on how the oceans and atmosphere interact near the equator.

The Intertropical Convergence Zone (ITCZ) is the region that circles the Earth near the equator, where the trade winds of both the Northern and Southern Hemispheres come together. North of the equator, strong sun and warm water of the equator heats the air in the ITCZ, drawing air in from north and south and causing the air to rise. As the air rises it cools, releasing the accumulated moisture in an almost perpetual series of thunderstorms. Satellite data, however, has confirmed that there is an ITCZ north of the equator and a parallel ITCZ south of the equator.

Variation in the location of the ITCZ is important to people around the world because it affects the north-south atmospheric circulation, which redistributes energy. It drastically affects rainfall in many equatorial nations, resulting in the wet and dry seasons of the tropics rather than the cold and warm seasons of higher latitudes. Longer term changes in the ITCZ can result in severe droughts or flooding in nearby areas.

“The double ITCZ is usually only identified in the Pacific and Atlantic Oceans on a limited and seasonal basis,” said Timothy Liu, of NASA’s Jet Propulsion Laboratory and California Institute of Technology, Pasadena, Calif., and lead researcher on the project. In the eastern Pacific Ocean, the southern ITCZ is usually seen springtime. In the western Atlantic Ocean, the southern ITCZ was recently clearly identified only in the summertime.

This is a major find for the science community, as the existence, location, and seasonality of the double ITCZ had remained controversial since 1969.