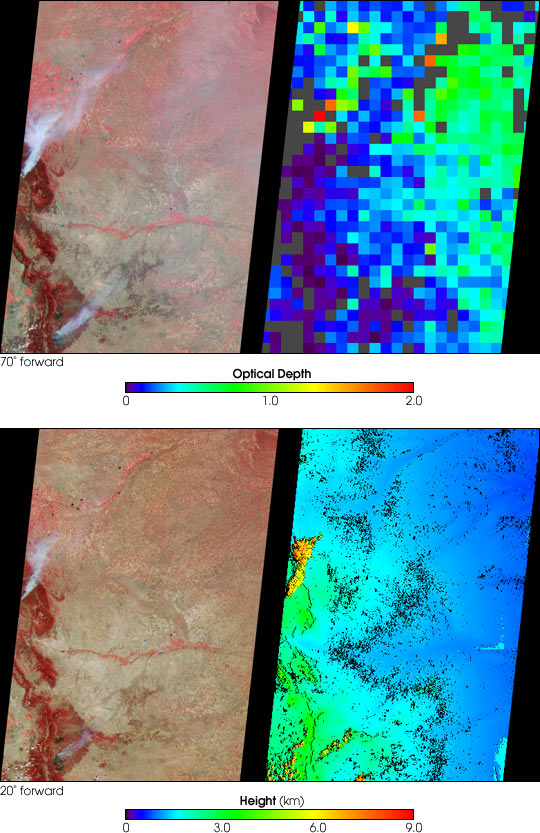 The Hayman fire, situated about 65 kilometers southwest of Denver, Colorado, is the largest fire ever recorded in that state. The amount and distribution of smoke from the Hayman fire and from the Ponil Complex fires south of the New Mexico-Colorado border are portrayed in these views from the Multi-angle Imaging SpectroRadiometer (MISR). The images were captured on June 9, 2002, on the second day of the Hayman fire, when only about 13 percent of the total 137,000 acres eventually consumed had been scorched.

The image at top-left was acquired by MISR’s most oblique (70-degree) forward-viewing camera, and the view at bottom-left was captured by MISR’s 26-degree forward-viewing camera. Both left-hand panels are "false color" views, utilizing near-infrared, red, and blue spectral bands displayed as red, green and blue respectively. With this spectral combination, highly vegetated areas appear red. At top right is a map of aerosol optical depth. This map utilizes the capability of the oblique view angles to measure the abundance of particles in the atmosphere. Haze distributed across the eastern part of the state is indicated by a large number of green pixels, and areas where no retrieval occurred are shown in dark grey. The more oblique perspective utilized within the top panels enhances the appearance of smoke and reveals the haze. In the lower left-hand panel the view is closer to nadir (downward-looking). Here the smoke plumes appear more compact and the haze across eastern Colorado is not detected. The lower right-hand panel is a stereoscopically derived height field that echoes the compact shape of the smoke plumes in the near-nadir image. Results indicate that the smoke plumes reached altitudes of a few kilometers above the surface terrain, or about the same height as the small clouds that appear orange along the bottom edge to the left of center.

Data used in these visualizations were generated as part of operational processing at the Atmospheric Sciences Data Center at NASA Langley Research Center. The images cover an area of about 400 kilometers x 565 kilometers.