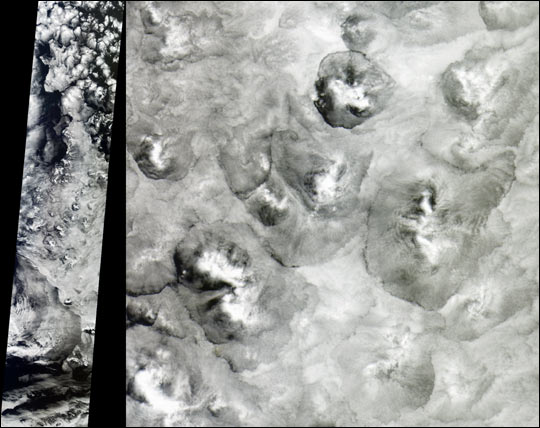 The shape and size of cellular patterns within marine stratocumulus cloud layers can change dramatically with the prevailing meteorological conditions. These views from the Multi-angle Imaging SpectroRadiometer (MISR) provide an example of very large scale closed cells, and can be contrasted with the small cells described in an earlier image release. As described in that release, cellular structures are associated with the sinking of air that is strongly cooled at the level of the cloud-tops. This type of scene is fairly typical of mid-latitude oceanic clouds unperturbed by cyclonic or frontal activity.

When the cell centers are cloudy and the main sinking motion is concentrated at cell boundaries, the cells are referred to as “closed.” The cell diameters in this image range from 40 to 100 kilometers (about twice the average size of closed cells in general) and show an increased brightness at the cell centers, giving them a mogul-like appearance. Because the cloud-top heights do not vary substantially across the cells, the distinctive appearance is more likely due to an increased concentration of cloud droplets at their centers.

The lefthand panel shows a part of the swath captured by MISR’s nadir (vertical-viewing) camera on November 25, 2001, and is displayed at a resolution of 1.1 kilometers per pixel (in the full-size image). The righthand panel highlights part of this scene at a resolution of 275 meters, and is centered at approximately 49.2 degrees south latitude and 179.9 degrees east longitude, covering an area of about 233 kilometers x 240 kilometers. The images utilize data from blocks 123 to 135 within World Reference System 2, path 68.