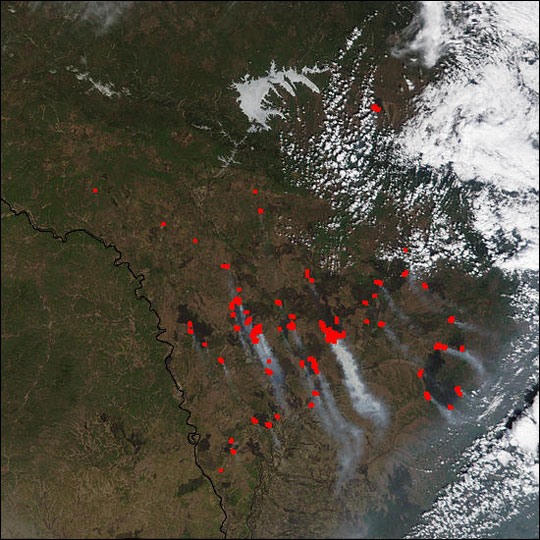 Vast areas of southeastern Russia have been scorched by fires over the last few weeks. All across Siberia fires have been raging, and this Moderate Resolution Imaging Spectroradiometer (MODIS) image from May 15, 2002, shows extensive, dark burn scars along with actively burning fires (red dots) on the north side of the Amur River, which separates Russia (north) and China (south).

The southern Amur region is largely devoted to farming and other agriculture, and these fires may have been set intentionally to prepare the land for the growing season. Fire is often used to clear land of unwanted vegetation, and to return the nutrients stored in vegetation back to the soil.

However, fires that are too frequent or severe can devastate the soil, eventually making it unsuitable for farming or grazing. Fires can also escape control and spread into protected areas. In this image, fires are mostly concentrated in a lowland area within the drainage basin of the Zeya River, which drains from the frozen lake at the top of the image.

Fires burning across southeastern Russia in May are filling the air with smoke that reaches for miles.