The Beginnings of Typhoon Hagibis 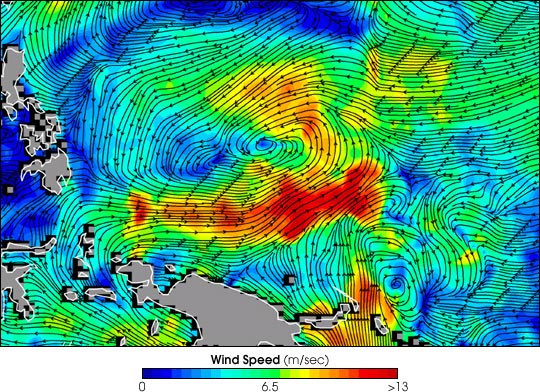 Although it eventually reached ?Super Typhoon? status, on May 15, 2002, Typhoon Hagibis was just getting started in the western Pacific Ocean north of New Guinea. This QuikSCAT image shows the wind speed and direction, with speeds categorized from 0.5 meters per second (1.1 miles per hour, darkest blue) to 12.5 meters per second (27.9 miles per hour, red) and higher. Black arrows mark the direction of the air flow.

The storm tracked westward for a time towards the Philippines before turning northeast. As of May 22, wind speeds had dropped to under 70 miles per hour, and the storm was several hundred miles east of Japan.

Though it's rather early in the season for typhoon development, the western Pacific is unusually warm for this time of year, and the warmer temperatures are fueling earlier storms.