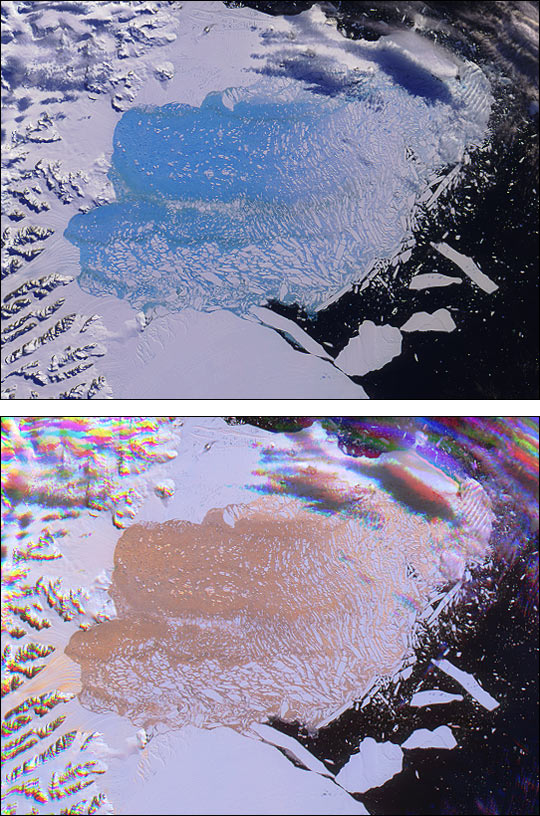 Both single and multi-angle views of the breakup of the northern section of the Larsen B ice shelf are shown in this image pair from the Multi-angle Imaging SpectroRadiometer (MISR). The Larsen B ice shelf collapsed and broke away from the Antarctic Peninsula during February and March, 2002—a progression observed by Terra’s Moderate-resolution Imaging Spectroradiometer (MODIS) and analyzed at the University of Colorado’s National Snow and Ice Data Center. The collapse is thought to have been accelerated by warm summer temperatures which caused meltwater to fill crevasses along the landward side of the Larsen shelf, leading to intensified pressures within the sheet structure.

In the top view, spectral variations across the scene are highlighted by using near-infrared, red and blue data from MISR’s nadir (vertical-viewing) camera. Here, the ice within the disintegrating ice shelf appears vibrant blue. Water has an intrinsic blue color due to the selective absorption of longer wavelengths such as red and infrared, and the translucent properties of ice within the collapsing shelf enables this absorption to be observed. The use of the near-infrared band within this false-color composite accentuates the effect. Light brownish streaks across the splintering sheet can also be discerned, and probably indicate regions where rocks and morainal debris were exposed from the interior of the shelf.

On the bottom, data from three different view angles and only one color channel were combined to create a multi-angle composite. This image displays red-band data from MISR’s 46-degree forward, nadir, and 46-degree backward-viewing cameras as red, green and blue, respectively. Here, the disintegrating ice shelf and the rough crevasses of glaciers appear orange. In contrast to the spectral composite, which provides information on the chemical composition of water ice, the colors in the right-hand image represent properties related to its physical nature. Because vertical protrusions or depressions within textured surfaces appear brighter on their illuminated faces, the orange color in the multi-angle composite suggests a macroscopically rough ice surface. Low clouds in the multi-angle view appear purple due to their ability to both forward scatter and backward scatter sunlight. Higher clouds and mountainous terrain are subject to geometric parallax which splits the imagery into spatially separated components, and their unusual appearance is an artifact of this effect.

These views were acquired on March 7, 2002, during Terra orbit 11798. Each image represents an area of approximately 149 kilometers x 186 kilometers.

Image of the Day Heat Water Sea and Lake Ice