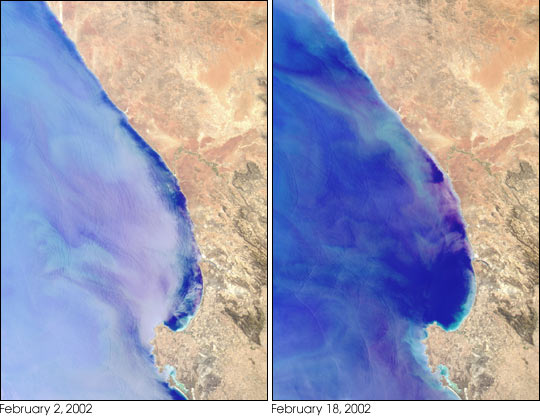 Although some red tides form a healthy part of phytoplankton production, recurrent harmful or toxic blooms also occur, with results depending upon the type of plankton and on atmospheric and oceanic conditions. At Elands Bay in South Africa’s Western Cape province, about 1000 tons of rock lobsters beached themselves during February 2002, when the decay of dense blooms of phytoplankton caused a rapid reduction in the oxygen concentration of nearshore waters. The lobsters (or crayfish, as they are known locally) moved toward the breaking surf in search of oxygen, but were stranded by the retreating tide.

The Multi-angle Imaging SpectroRadiometer’s nadir camera acquired these red, green, blue composites on February 2 and 18, 2002, during Terra orbits 11315 and 11548. The colors have been accentuated to highlight the bloom, and land and water have been enhanced separately. The two views show the shoreward migration of the algal bloom. Each image represents an area of about 205 kilometers x 330 kilometers. Elands Bay is situated near the mouth of the Doring River, about 75 kilometers northeast of the jutting Cape Columbine.

The term “red tide” is used to refer to a number of different types of phytoplankton blooms of various hues. The wine color of certain parts of this bloom are consistent with the ciliate species Mesodinium rubrum, which has been associated with recurring harmful algal blooms along the Western Cape coast. Under these conditions, the lobsters are not poisoned. During the recent event, government and military staff transported as many of the living lobsters as possible to areas that were less affected by the red tide. At the same time, people came from across South Africa to gather the undersized creatures for food. The effects of the losses on the maritime economy are expected to be felt over the next few years.