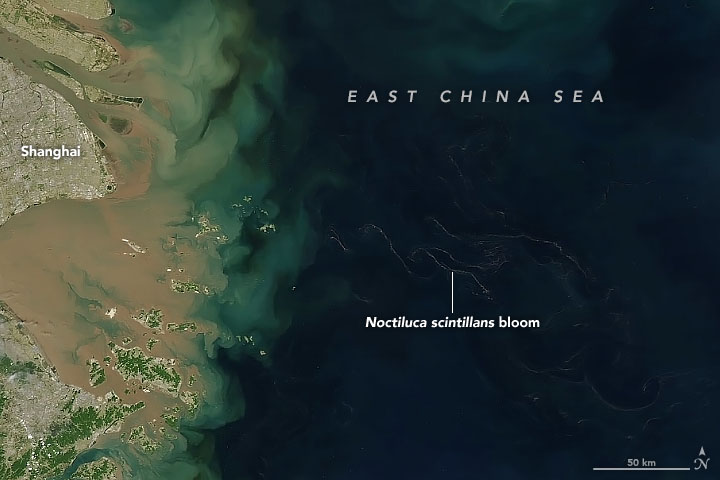 Mariners have long noticed that the sea sometimes sparkles at night with an ethereal blue glow, especially after boats, waves, or even swimmers disturb the water.

Single-celled organisms known as Noctiluca scintillans—a type of dinoflagellate phytoplankton—is responsible for the glow. But despite the beauty of these “blue tear” blooms, when these bioluminescent organisms aggregate or grow into very high concentrations, they can form massive “red tides” that can harm marine life and create dead zones.

Scientists typically study such blooms by boat, but their vast size makes it difficult to map their full extent. However, scientists now have a powerful tool—satellite monitoring—to help them keep an eye on red Noctiluca scintillans blooms found in the East China Sea. In a study published in Geophysical Research Letters, a team of researchers described how they developed a technique to find and analyze blooms from a set of nearly 1,000 images taken between 2000 and 2017 by satellites and the International Space Station (ISS). Most of the data came from the Moderate Resolution Imaging Spectroradiometer (MODIS) on NASA’s Terra and Aqua satellites; some come from the Hyperspectral Imager for the Coastal Ocean (HICO) on the ISS.

The natural-color MODIS image above shows an example of a Noctiluca scintillans bloom near the mouth of the Yangtze River on May 18, 2017. MODIS can detect the blooms because this type of phytoplankton absorbs more blue light and scatters more red light than other ocean microorganisms. Since Noctiluca scintillans also scatters a significant amount of near-infrared light, the researchers were also able to identify blooms by analyzing false-color images that incorporate near-infrared observations. The long-exposure photograph below shows the luminous glow the phytoplankton can produce. 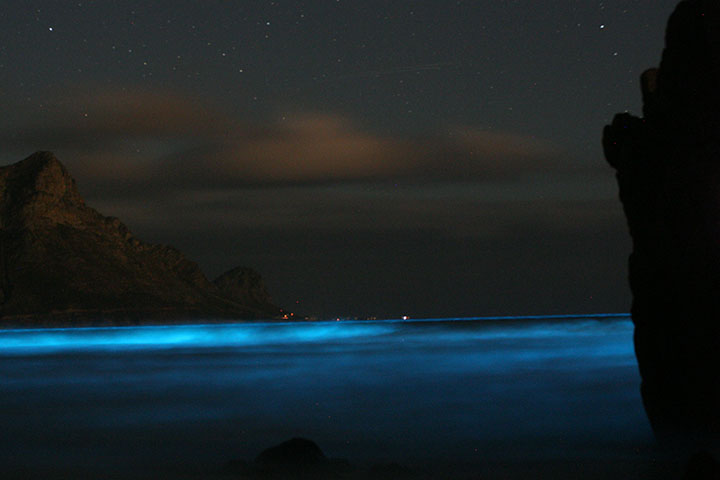 Since MODIS has collected daily images of the region for nearly two decades, the researchers were able to detect seasonal and interannual variations in the location and size of blooms. Noctiluca populations typically peaked between April and August and were usually found in coastal waters, near river mouths or deltas. Occasionally blooms drifted as far as 300 kilometers (180 miles) offshore.

The size and duration of the blooms varied from year to year, but there was a trend toward larger and longer-lasting blooms. In 2017, there was an especially long-lasting bloom that persisted from mid-April to mid-July. There were fewer blooms in the early 2000s, likely because construction of the Three Gorges Dam reduced the flow of nutrients down the Yangtze River.

While the research demonstrated that satellites can be useful for monitoring Noctiluca scintillans blooms, the authors cautioned that there are key features of the blooms that satellite sensors like MODIS or HICO cannot detect. Most notably, the sensors only observe the surface of the water, while parts of the blooms occur deeper in the water column, out of a satellite’s view.

This image captures a plankton bloom in the Capricorn Channel off the Queensland coast of Australia. The whispy pattern of the bloom suggests that the plankton are Trichodesmium—a photosynthetic cyanobacteria, also called “sea saw dust” that is common in the world’s oceans. Trichodesmium is frequently observed around Australia this time of year. In fact, Captain Cook’s ship logs written while he was sailing in Australian waters in the 1700s contain detailed descriptions of Trichodesmium blooms. Astronauts frequently photograph large plankton blooms during their missions because a significant portion of the ISS orbits cross long stretches of ocean. In the process, astronauts become acute observers of subtle changes in sea surface dynamics. Imagery of surface plankton blooms offer multi-dimensional (in space and time) visualizations of the unique physical and chemical circumstances that support the blooms.