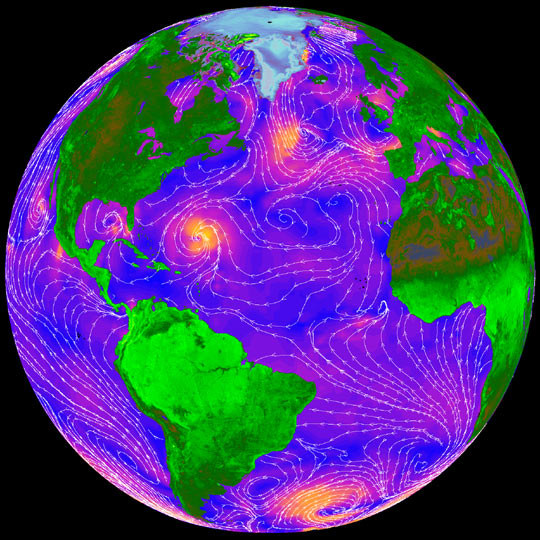 Armed with data from NASA’s Quick Scatterometer (Quikscat), weather forecasters can now predict hazardous weather events over the oceans as much as 6 to 12 hours earlier. (Click to read the full press release.) The direction and intensity of surface winds across the Atlantic Ocean are shown in the Quickscat image above. Orange areas show where winds are blowing the hardest, while violet is an intermediate value, and blue shows relatively light winds.

In recent years, data from the Quikscat scatterometer, developed by NASA’s Jet Propulsion Laboratory (JPL), Pasadena, Calif., have proven useful in improving forecasts of extreme wind events, such as hurricanes, and in monitoring longer-term climatic effects such as El Niño. Quikscat’s SeaWinds scatterometer instrument is a specialized microwave radar that continuously measures both the speed and direction of winds near the ocean surface in all weather conditions.

Launched June 19, 1999, the Quikscat spacecraft flies at an altitude of 800 kilometers (497 miles), circling the Earth from pole to pole every 100 minutes. The sensor takes approximately 400,000 measurements over 93 percent of Earth’s surface every day.