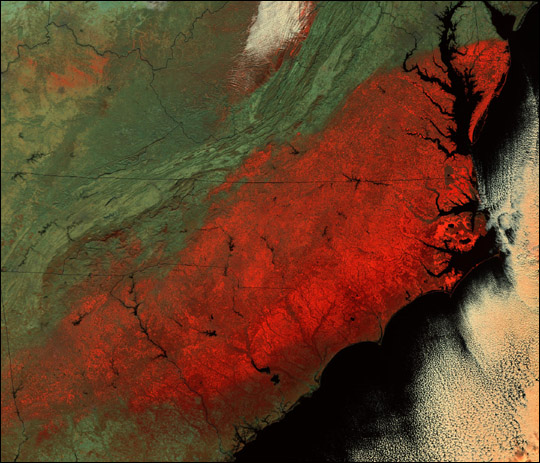 A new year's storm brought heavy snow to portions of the southeastern United States, with some regions receiving more than a foot in less than two days. By Friday, January 4, 2002, the skies had cleared, and MODIS captured this false-color image showing the extent of the snowfall. Snow cover is red, and extends all the way from Alabama (lower left), up through Georgia, South Carolina, North Carolina, Virginia, and Maryland, including the southern reaches of the Delmarva Peninsula (upper right). Beneath some clouds in West Virginia (top center), snow is also visible on the Allegheny Mountains and the Appalachian Plateau, although it did come from the same storm.

Though red isn't the color we associate with snow, scientists often find "false-color" images more useful than "true-color" images in certain situations. True-color images are images in which the satellite data are made to look like what our eyes would see, using a combination of red, green, and blue. In a true-color image of this scene, cloud and snow would appear almost identical—both would be very bright white-and would be hard to distinguish from each other. However, at near-infrared wavelengths of light, snow cover absorbs sunlight and therefore appears much darker than clouds. So a false-color image in which one visible wavelength of the data is colored red, and different near-infrared wavelengths are colored green and blue helps show the snow cover most clearly.

In the true-color image above, also acquired January 4 by SeaWiFS, the remnants of the winter storm can be seen pushing eastward over the Atlantic Ocean. Due east of North Carolina you can still see the characteristic spiral shape of the low pressure system.

The MODIS scene was acquired via direct broadcast at the Space Science and Engineering Center, University of Wisconsin-Madison. For more information, visit http://www.ssec.wisc.edu/ and http://eosdb.ssec.wisc.edu/modisdirect/.