Fire in the Kalahari 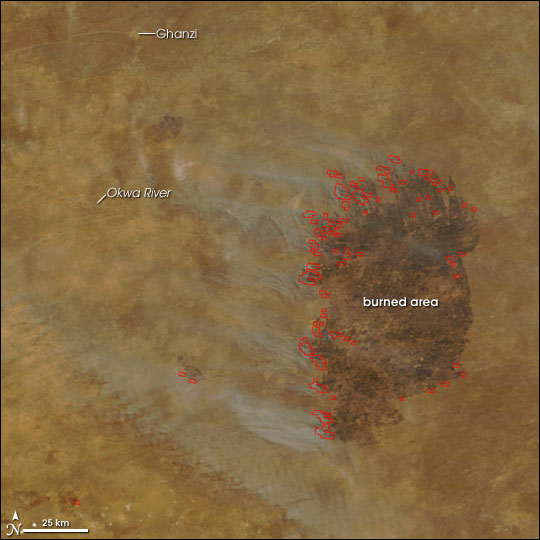 A huge bushfire was burning in the Kalahari in western Botswana on August 29, 2008. The fire is near the western boundary of (and perhaps inside) Botswana’s largest national park, the Central Kalahari Game Reserve. The area is in the Ghanzi district, Botswana's least populated administrative district. The small city of Ghanzi, the district capital, is about 90 kilometers (56 miles) from the northwest perimeter of the blaze.

In this image from the Moderate Resolution Imaging Spectroradiometer (MODIS) on NASA’s Terra satellite, actively burning areas detected by the sensor are outlined in red. The burned area is dark brown compared to the tan colors of the surrounding landscape, which is savanna in the reserve itself and transitions to the Kalahari Desert toward the southwest. August is near the height of the dry season in this area. The fire may be natural or caused by accidental or deliberate human activity. The large version of the image shows a wider area, including the lush vegetation of the Okavagno Delta to the north, and the bright, salt-laden soils of the Makgadikgadi Pans to the northeast.