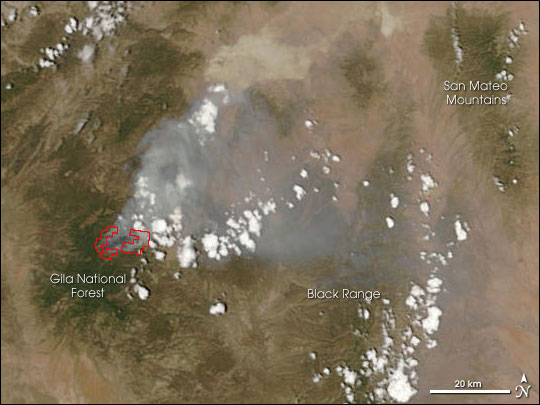 A large wildfire was burning in western New Mexico’s Gila National Forest in June 2006. This image from the Moderate Resolution Imaging Spectroradiometer (MODIS) on NASA’s Terra satellite shows the Bear Fire on June 20. Locations where MODIS detected actively burning fire are outlined in red. (An image from June 21 shows the fire partially hidden by clouds.) According to the National Interagency Fire Center report from June 22, the Bear Fire was threatening numerous residences and cabins as well as wildlife habitat. The fire was burning through extremely dry, continuous stands of timber, and had grown to more than 33,000 acres as of June 22.

This image has a spatial resolution (level of detail) of 250 meters per pixel. The large image shows a wider area at the same resolution. The MODIS Rapid Response System provides this image at additional resolutions.