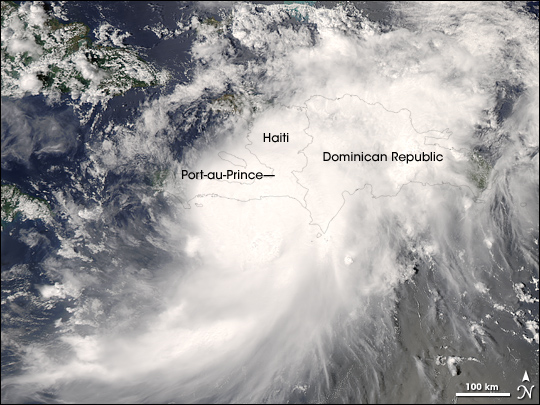 Hurricane Gustav formed off the coast of Hispaniola in the Caribbean Sea on August 25, 2008. Starting as a tropical depression, it built in intensity quite rapidly to become a Category 1 strength hurricane on August 26, just as it approached Hispaniola.

This photo-like image was made from data collected by the Moderate Resolution Imaging Spectroradiometer (MODIS) on NASA’s Aqua satellite at 1:55 p.m. local time (17:55 UTC) on August 26. Hurricane Gustav was centered just south of Haiti and bringing strong winds and heavy rain. The southern peninsula of Haiti is a major crop- and fruit-growing region in a country already struggling with food price hikes and shortages. The National Hurricane Center reported the hurricane as having sustained winds of around 150 kilometers per hour (90 miles per hour) when MODIS acquired this image.

The island of Hispaniola is divided between the nations of the Dominican Republic and Haiti. Hit the previous week by heavy rains from Tropical Storm Fay, the island nations again saw widespread flooding and landslides. Authorities in the Dominican Republic reported a death toll from the storm of 11 people, according to MSNBC news sources. Another three deaths in Haiti were recorded, as of August 27.

After striking Hispaniola, the storm system lost some power to become a tropical storm again. The National Hurricane Center forecasted that Gustav would remain a tropical storm as it grazed along the southern coast of Cuba, bringing strong winds and heavy rain to Jamaica and Cuba. Longer term forecasts raise the threat of Gustav gaining significant strength after passing Cuba and entering the warm waters of the Gulf of Mexico, possibly becoming a Category 3 storm.