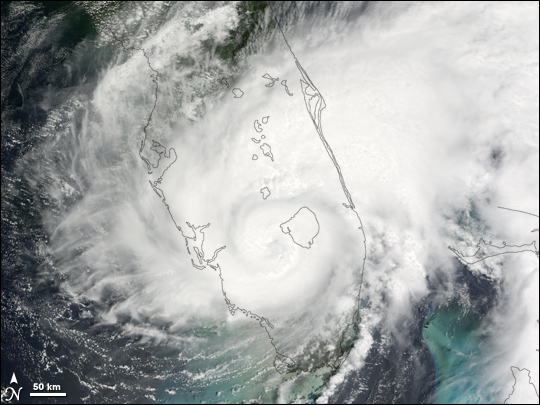 Tropical Storm Fay came ashore on the Florida Peninsula near Naples, the same area struck in 2005 by Hurricane Wilma. Unlike Wilma, Fay came ashore without reaching hurricane status, though its heavy rains brought concerns about potential flooding as well as strong storm surge. Just days before, Fay caused several deaths in the Dominican Republic, as well as flash floods in Cuba and Haiti. On August 18, forecasters predicted that Fay would intensify enough to become a Category 1 Hurricane. This was expected to happen just as the storm was making its first landfall in Florida, crossing the Key Islands. However, the storm merely retained a steady strength as it crossed from Cuba to the Gulf of Mexico. With 95-kilometer-per-hour (60-mile-per-hour) winds and a storm surge between 60 to 120 centimeters (two to four feet) above normal, Fay merited tropical storm warnings from the National Hurricane Center throughout much of southern Florida.

This photo-like image was made from data collected by the Moderate Resolution Imaging Spectroradiometer (MODIS) on NASA’s Terra satellite at 12:15 p.m. local time (16:15 UTC) on August 19. Fay had made second landfall on the Florida Peninsula just a few hours earlier and was traveling gradually up the length of the state. Despite failing to reach minimal hurricane strength, Fay here looks more like a hurricane than it did the previous day when the storm had a less-intense spiral structure and lacked a central eye. Within hours of this image acquisition, several tropical storm warnings along the eastern coast of Florida were rescinded, but new warnings to the north were being issued, including hurricane warnings on the Atlantic Coast north of the storm. Forecasters at the National Hurricane Center believed the storm would reach the Atlantic Ocean and rebuild to hurricane status off the coast, then turn westward to come ashore a third time in Florida near the border with Georgia.