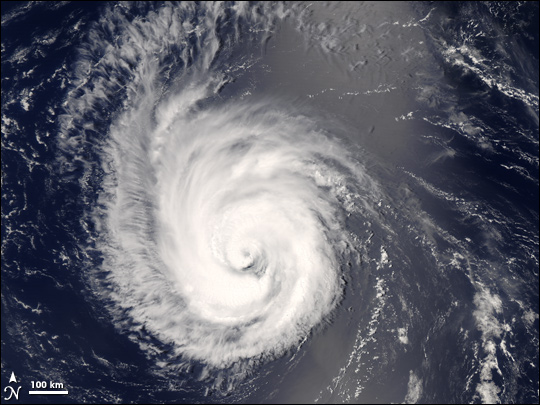 Hurricane Bertha began as a wave-like disturbance in the tropical easterlies off the western coast of Africa on July 3, 2008. Intensifying gradually over the next few days as it traveled across warm waters in the Atlantic Ocean, Bertha reached hurricane status, peaking as a Category 3 storm without making landfall or crossing any islands.

This natural-color satellite image of Bertha was obtained by the Moderate Resolution Imaging Spectroradiometer (MODIS) on NASA’s Aqua satellite at 2:05 p.m. local time (17:05 UTC) on July 10, 2008. The hurricane was a Category 1 strength storm at this time. Bertha was well-developed, but small, with a distinct, cloud-filled eye at its center.

As of July 14, the storm was bringing heavy rain and strong surf and rip currents to Bermuda, but other than power outages, it was not causing major problems, according to the Associated Press. Bertha, by then a tropical storm system, passed the island during the day.