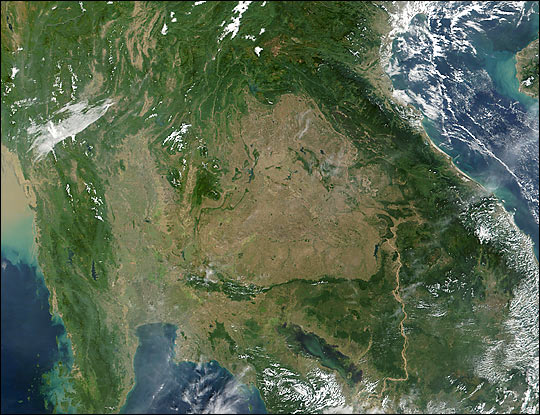 Home to beautiful jungles, booming industry, and age-old temples, Southeast Asia has become a confluence of ancient and modern life. This true-color image of mainland Southeast Asia was acquired on November 30, 2001, by the Moderate-resolution Imaging Spectroradiometer (MODIS), flying aboard NASA’s Terra spacecraft. The body of water in the upper righthand corner of the image is the Gulf of Tonkin. East and southeast of the gulf are the dark green jungles of Vietnam, Laos, and Cambodia.

The light brown Mekong River winds its way through the center of the Cambodian jungle and into southern Vietnam. The dark blue patch to the left of the river at the bottom of the image is the Tonle Sap. Literally translated to mean “Great Lake,” the Tonle Sap is the largest freshwater lake in Southeast Asia. During the rainy season from May to October, the lake will more than double in size growing from its wintertime extent of 3,000 square kilometers to over 7,500 square kilometers.

North of the lake, approximately in the center of the image, is a saucer-shaped patch of reddish brown land known as the Khorat Plateau. Situated 90 to 200 meters above sea level in eastern Thailand, the dry plateau is mostly covered with farmland and savanna-type grasses and shrubs. Moving south again, the large body of light blue water at the bottom central portion of the image is the Gulf of Thailand. By switching to the full resolution image (250 meters per pixel) and following the Gulf of Thailand to its northernmost extent, one can see a pinkish beige patch of terrain covered by a faint latticework of fine lines. These are likely to be the network of roads that crisscross Bangkok and its surrounding suburbs and fertile farmland.

The narrow strip of land to the east of the Gulf of Thailand is the Malay Peninsula. The body of water to the left of the peninsula is the Gulf of Martaban, which borders Myanmar (Burma). At the far upper lefthand corner of the image, the water has turned light brown from sediment dumped into the sea by the Salween River, which travels the length of eastern Myanmar.