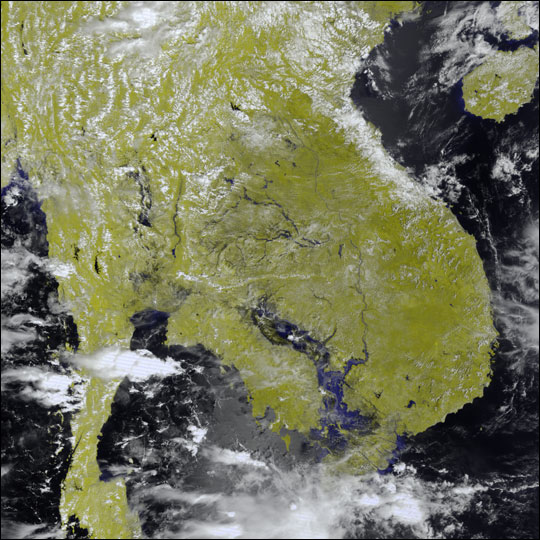 For two months, heavy rains have inundated Indochina, causing floods throughout Cambodia, Vietnam, and Thailand. This false-color image of the pennisula was acquired on September 30, 2002, by the Moderate Resolution Imaging Spectroradiometer (MODIS) aboard NASA’s Terra spacecraft.

Thailand can be found on the eastern side of the pennisula just above the Gulf of Thailand. The Chao Phraya River and the Yom River run down the center of the country into the gulf. Though the rivers now resemble small, narrow lakes in central Thailand, they normally would be hardly visible in the image. The flooding of these and other rivers across Thailand have claimed over 101 lives in the country, damaged 2.5 million acres of farmland, and have cost close to $32.27 million in damage. The floods are now beginning to inundate Bankok, which sits at the mouth of the Chao Phraya.

On the southeastern side of the Pennisula, both Cambodia and Vietnam have been hit with some of the worst seasonal floods in years. Over 150 people have died in Vietnam alone since July. Normally, the Tonle Sap, which is the oblong, inland body of water pointing toward the upper left-hand corner of the image, would appear as a well-defined lake separated from the Gulf of Thailand by green wetlands. During the rainy season, however, the flow of the Mekong River, running down the righthand side of the image, increases. The excess water backs up at the Mekong Delta on the east side of the Indochina Peninsula and flows west into the Tonle Sap and the surrounding wetlands. The result is the large uninterrupted lake that appears as an extension of the Gulf of Thailand in Cambodia.

In this image, clouds are white, water is black and blue, and solid land is pea green.