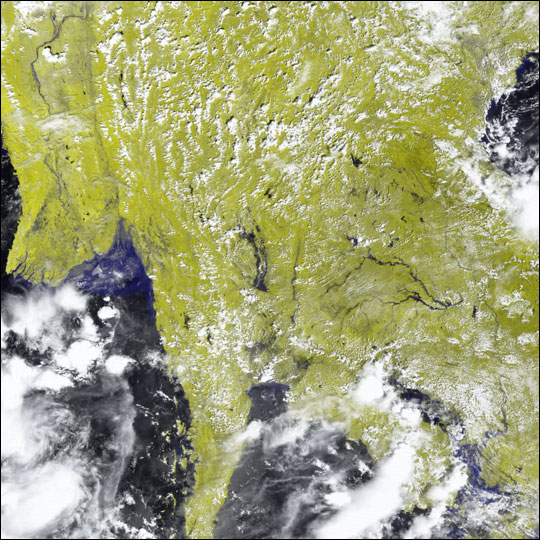 For two months, heavy, seasonal rains have inundated Thailand, flooding the countryside and killing over 120 people. This false-color image of Thailand and the Indochina Peninsula was acquired on October 5, 2002, by the Moderate Resolution Imaging Spectroradiometer (MODIS) aboard NASA’s Terra spacecraft.

Thailand can be found in the center of the image just above the Gulf of Thailand. The Chao Phraya River and the Yom River run down the center of the country into the gulf. Though the rivers now resemble narrow lakes in central Thailand, they normally would be hardly visible in the image. In addition to the loss of life, 2.5 million people have suffered property damage or loss as a result of the floods. In many towns in central and northern Thailand people can only travel by boat, and quite a few town centers have turned into floating markets.

Turning to the southeastern side of the peninsula, floods are abating in both Cambodia and Vietnam. Only a month ago they were experiencing some of the worst seasonal floods in years. Over 150 people have died in Vietnam alone since July. Normally, the Tonle Sap, which is the oblong, inland body of water pointing northwest, would appear as a well-defined lake separated from the Gulf of Thailand by green wetlands. During the rainy season, however, the flow of the Mekong River, running down the righthand side of the image, increases. The excess water backs up at the Mekong Delta on the east side of the Indochina Peninsula and flows west into the Tonle Sap and the surrounding wetlands. The result is the large uninterrupted lake that appears as an extension of the Gulf of Thailand in Cambodia.

In this image, clouds are white, water is black and blue, and solid land is pea green.

Image by Jesse Allen, based on data from the MODIS Rapid Response Team at NASA-GSFC.