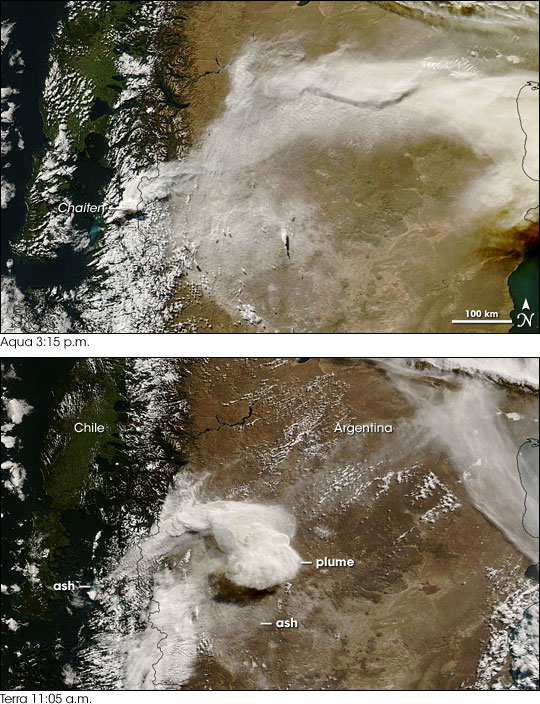 Both images show a plume emanating from the volcano and blowing toward the northeast. The plume had traveled across Argentina by the time of the afternoon image. Both images also show evidence of recent ash falls. Volcanic ash that has settled on land leaves a gray-beige, ghostly veneer southeast of the summit. Likewise, volcanic ash has colored the nearby ocean water west of the summit. That water appears bright blue-green.

On May 6, the same day MODIS acquired these images, the volcano’s activity intensified. The volcanic plume reached an altitude of 30 kilometers (18.6 miles), and volcanic ash cover was 1.5 meters (5 feet) in places. In contrast, the sulfur dioxide released by the volcano was relatively small for an eruption of this magnitude—only a few thousand tons, compared to 20 million tons released by Mount Pinatubo in 1991. As the volcano continued erupting, officials evacuated residents of Patagonia via navy warship.

Images of this event that use a combination of visible and infrared light to better distinguish between the volcanic plume and nearby clouds are available from the MODIS Rapid Response Team for the morning and afternoon of May 6.