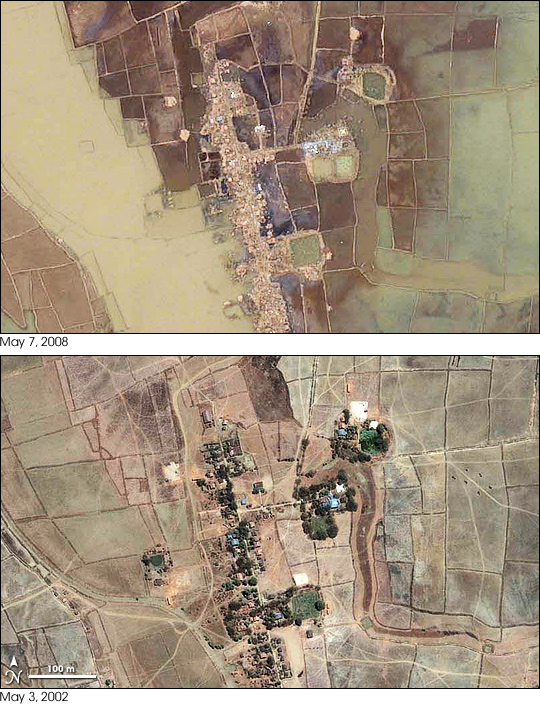 This scene captured by the Ikonos satellite on May 7, 2008, illustrates the complete devastation Cyclone Nargis brought to Burma (Myanmar) when it barreled ashore on May 3. This tiny village was located about 27 kilometers (16 miles) south of Yangon (Rangoon), the country’s largest city. In the lower image, taken on May 3, 2002, trees and buildings line a single street, which is surrounded by fields of crops, probably rice. After the disaster, the trees and buildings are completely gone, replaced by messy piles of rubble. The fields are largely submerged under brown and green floodwater. The tiny canal that ran alongside the village on the left side of the image has disappeared into a wide, brown river. A faint curving line outlines the canal’s banks within the new river.

Destruction on this scale occurred throughout the Irrawaddy Delta, where 90-95 percent of the buildings were destroyed, reported the United Nations Office for the Coordination of Humanitarian Affairs. The government reported the official death toll to be more than 22,000, with 41,000 missing, said the UN. The senior U.S. diplomat in Burma estimated that more than 100,000 people may have perished in the storm, said CNN. 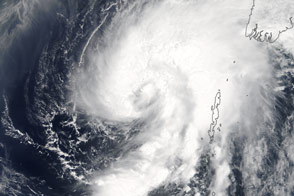 It is the first named cyclone of 2017 in the northern hemisphere.