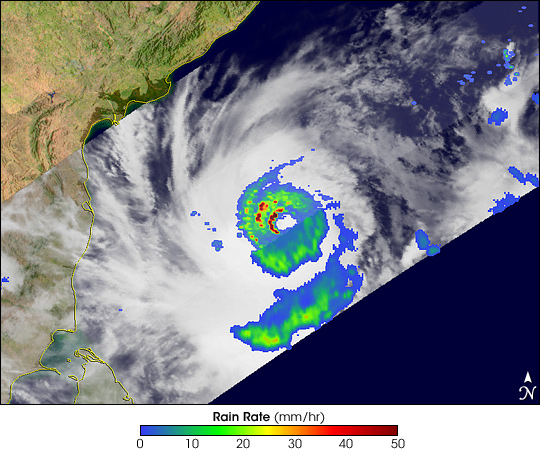 The recent formation of Tropical Cyclone Nargis in the Bay of Bengal coincides with the start of cyclone season in the North Indian Ocean, which typically runs from April through December. Despite the long season, the region, which includes the Bay of Bengal and the Arabian Sea, on average has just over five named storms per year, with only two becoming full tropical cyclones.

Nargis formed into a tropical cyclone on April 27, 2008, in the central Bay of Bengal about 360 miles off of the southeast coast of India. This image of Nargis was captured by the Tropical Rainfall Measuring Mission (TRMM) satellite on April 29, 2008, at 12:02 a.m. local time (April 28, 18:32 UTC). The color-coded data are rain rates measured by TRMM’s Precipitation Radar (top swath) and Microwave Imager (bottom swath). The rain rates are superimposed on observations of clouds by TRMM’s Visible and Infrared Scanner. (Land surface data are from the NASA Blue Marble.)

A large, well-defined eye was present at the time of this image, and in the western semi-circle, a strong eyewall can be identified by intense rainfall (dark red arc). The storm is very symmetric, with moderate-intensity rain bands (green) curving tightly around the center. At the time of this image, Nargis was a Category 1 storm with maximum sustained winds estimated at 75 knots (86 mph) by the Joint Typhoon Warning Center. The system was upgraded to a Category 2 storm a few hours later. As of April 30, Nargis was predicted to move northeast and make landfall in Burma (Myanmar) between May 2 and May 3.