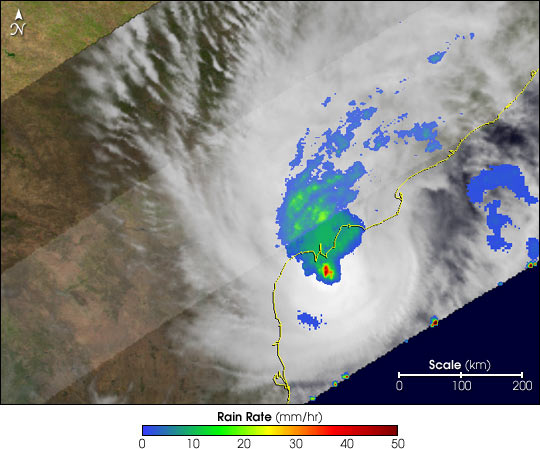 A tropical cyclone (03B) with winds reported to be up to 75 mph hit the east coast of India just after midnight local time on the 16th of December 2003. At least 11 people perished in the storm, which also brought heavy rains to the region. The cyclone formed in the southern part of the Bay of Bengal, and then it moved steadily northwestward before coming ashore at the port city of Vishakhapatnam in the Indian state of Andhra Pradesh.

The Tropical Rainfall Measuring Mission (TRMM) satellite obtained this image of the cyclone just as the center was approaching the coastline. The image was taken at 12:00 UTC on December 15, 2003. It shows the cyclone’s rainfall distribution as seen from above by the TRMM Precipitation Radar in the inner swath and the TRMM Microwave Imager in the outer swath. These observations are overlaid on infrared data from the TRMM Visible Infrared Scanner (VIRS) in white.

A localized area of intense rain appears near the center in red; however, most of the rainfall is moderate in intensity (green areas), with rain rates on the order of 10 to 20 millimeters per hour north of the center. The VIRS data show that the storm’s cloud structure is symmetrical and broad, which means it was not being disturbed by wind shear.