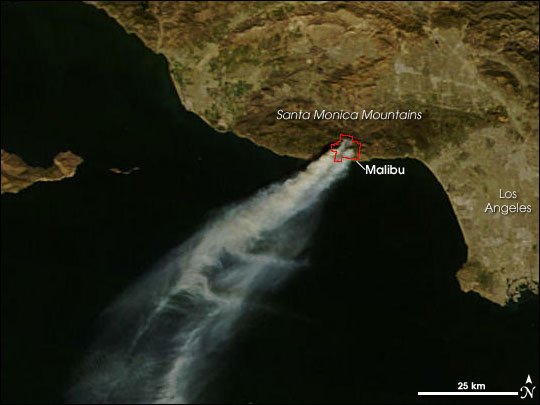 On November 24, 2007, a fire started in Corral Canyon northwest of Malibu and was rapidly fanned into a large blaze by Santa Ana winds. Numerous homes were destroyed in the area, which is at the wildland-urban interface between the Santa Monica Mountains and Malibu. This image from the Moderate Resolution Imaging Spectroradiometer (MODIS) on NASA’s Terra satellite on November 24 shows the smoke plume trailing far out over the Pacific Ocean. The area in which MODIS detected active fire is outlined in red. According to the interagency InciWeb Incident Information System, the Corral Fire was about 4,700 acres and 40 percent contained as of Sunday, November 25.