Tidal Surge on the North Sea 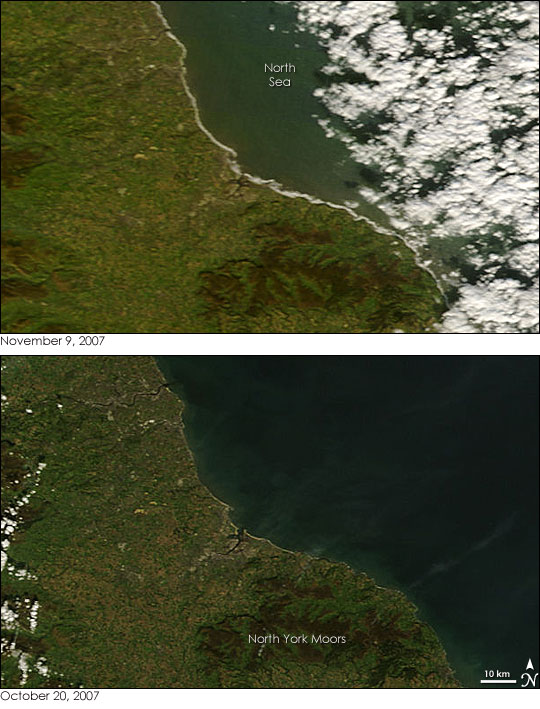 The shores of northeastern England were white with surf on the morning of November 9, 2007, when the Moderate Resolution Imaging Spectroradiometer (MODIS) on NASA’s Terra satellite captured the top image. Strong winds and a high tide pushed a surge of water into eastern England and the Netherlands. Though the largest surge came ashore in East Anglia, south of the region shown here, the violence of the large waves near North Yorkshire is evident in the white froth that lines the shore. In the large image, which shows a wider area, the North Sea is brown with sediment, probably a mixture of coastal erosion and bottom sediments churned up by the strong tides. Terra MODIS took the lower image on October 20, at nearly the same time of day as the November 9 image. This photo-like image shows surf conditions on a calm day.

Tidal surges, such as the surge that occurred on November 9, can cause extensive coastal damage. On January 23, 1953, a tidal surge flooded up to two miles inland, killing 307 people and damaging about 24,000 homes, reported BBC News. The toll was higher in the Netherlands, where more than 1,800 died in the surge. Though the surge on November 9, 2007, was the largest since 1953, the sea did not claim any lives or cause extensive property damage, said BBC News.

Daily images of England are available from the MODIS Rapid Response System.