Drought in the Pacific Northwest 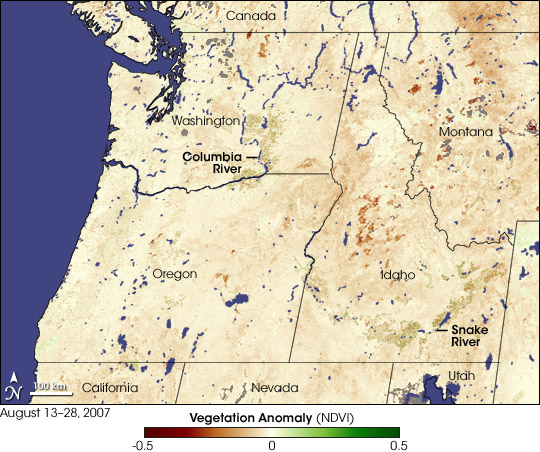 As summer headed toward fall in 2007, much of the United States was experiencing drought. This image shows relative vegetation greenness from August 13-28, 2007, compared to the average greenness for 2000–2006. Greenness is a general indicator of the area covered by vegetation, as well as its density and health. The image was made with observations collected by the Moderate Resolution Imaging Spectroradiometer (MODIS) on NASA’s Terra satellite.

In many parts of the Northwest, vegetation conditions were near average (yellow areas) compared to conditions for the previous 6 years. But aside from areas that were near average, this vegetation anomaly image reveals more brown (below-average conditions) than green (above-average conditions). The most dramatic brown spots, such as those concentrated in central Idaho, mark areas recently scorched by fires. Only in a few locations in the Northwest does a tinge of green emerge from the landscape; irrigated croplands (green specks) along the Snake and Columbia Rivers mix with what are probably fallow fields (brown specks).