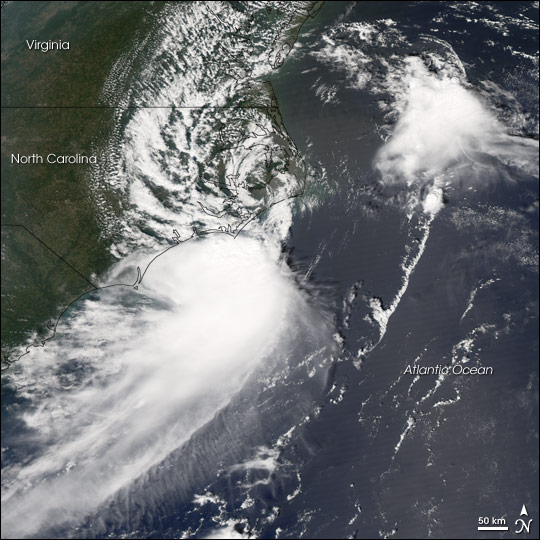 Tropical Storm Gabrielle briefly crossed land, touching North Carolina’s Outer Banks on September 9, 2007. The center of the storm came near Cape Lookout National Seashore, and after passing over Pamlico Sound briefly, headed back out to sea just twelve hours later near Kill Devil Hills. The storm system was not at all dramatic, with peak winds around 70 kilometers per hour (45 miles per hour) as it passed over the Outer Banks, according to the Associated Press. As of the afternoon of September 10, the storm was expected to stay out to sea and weaken as it crossed cooler water. In North Carolina, there were no reports of emergency calls or serious damage, and mostly the storm system was credited with light rains and some inconvenience.

The Moderate Resolution Imaging Spectroradiometer (MODIS) on NASA’s Aqua satellite acquired this photo-like image at 2:00 p.m. local time (18:00 UTC) on September 9, 2007. The loose structure of the storm system, with only a hint of spiral structure, and the patchy clouds show that Gabrielle was not a particularly dangerous or powerful storm. However, the storm did have a discernible if not dramatic eye. Here, the eye appears over Pamlico Sound, behind the barrier of islands that forms the Outer Banks of North Carolina.

You can download a 250-meter-resolution KMZ file of Tropical Storm Gabrielle suitable for use with Google Earth.