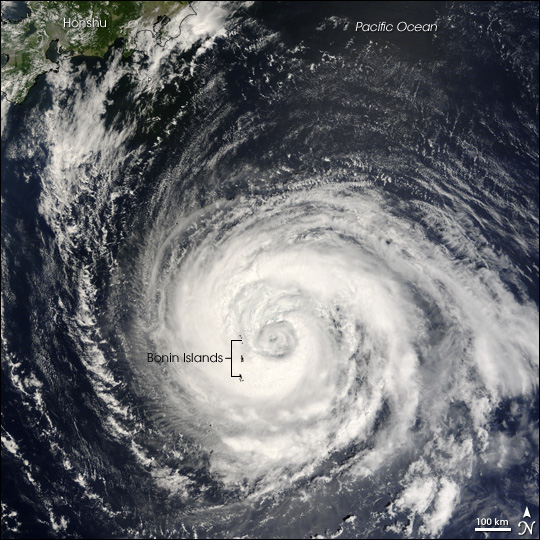 The name Fitow comes from the name of a Micronesian flower found on the island of Yap, according to the Hong Kong Observatory, which provides the list of names for typhoons in the western Pacific. Typhoon Fitow claimed its name from this list after forming in the western Pacific and reaching typhoon status on August 29, 2007. The storm system gradually built in power as it drew towards the main islands of Japan, briefly weakening from Category 2 to Category 1 before rebuilding again. Forecasters were calling for the storm to continue on its track towards Honshu and make landfall on the island either late on September 5 or early in the morning of September 6. Fitow tracked through a sparsely populated portion of the Pacific Ocean, bringing heavy rain and storm-driven waves to those islands near its path.

The Moderate Resolution Imaging Spectroradiometer (MODIS) on NASA’s Terra satellite acquired this photo-like image at 10:15 a.m. local time (1:15 UTC) on September 4, 2007. Just a few hours before MODIS observed the storm, the Joint Typhoon Warning Center estimated Fitow’s sustained winds to be over 130 kilometers per hour (80 miles per hour). The satellite image shows Fitow to have tightly wound bands of clouds around a well-defined, though cloud-filled eye, and towering thunderstorms characteristic of powerful tropical storm systems. At the time MODIS observed Typhoon Fitow, the storm was brushing along the Bonin Islands as it tracked north-northwest towards Honshu, the largest of the islands in the Japanese chain.

You can download a 250-meter-resolution KMZ file of Typhoon Fitow suitable for use with Google Earth.