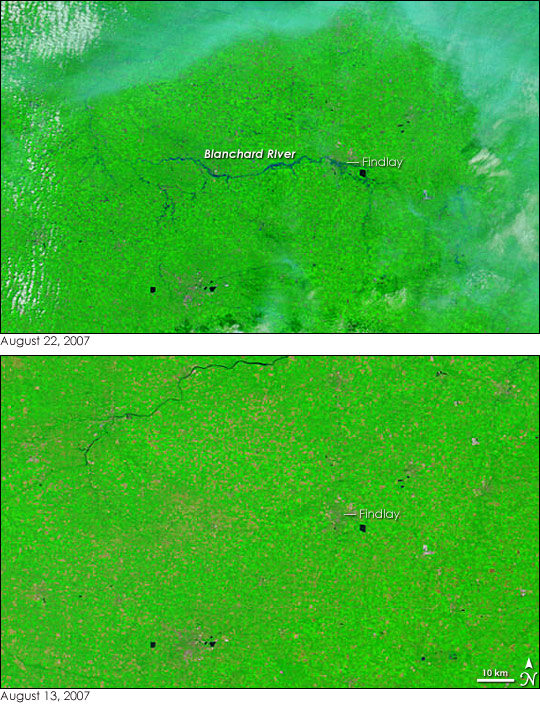 Water levels on the Blanchard River in northwestern Ohio reached near-record levels a short time after the Moderate Resolution Imaging Spectroradiometer (MODIS) on NASA’s Terra satellite captured the top image at 12:30 p.m. Eastern Daylight Time, on August 22, 2007. At 1:00 p.m., National Weather Service gauges in Findlay, Ohio, recorded water levels of 18.46 feet, just under six and a half inches short of the record crest of 18.5 feet set on March 13, 1913. In both cases, the river rose more than seven feet above its flood stage of 11 feet. The August 22 flood swamped the city of Findlay, forcing hundreds from their homes and putting the city in a state of emergency, reported the Associated Press on August 23.

The disastrous floods along the Blanchard River can be seen in the top image. The image was made with a combination of visible and infrared light to increase the contrast between water and land. Water is dark blue or black, while plant-covered land is bright green. Tiny squares of plant-free land, most like fallow fields in this case, are tan. Cities are gray, looking like a dark smudge against the bright green landscape. Lingering clouds are light blue and white.

The severity of the flood can be gauged by comparing the top image with the lower image, which was taken on August 13, 2007. In the lower image, the Blanchard River is too small to be visible. By August 22, the river and many of its tributaries are clearly visible. The river expands over Findlay, and then bends south.

Ohio was not the only state that experienced floods in mid-August. A string of severe thunderstorms dumped heavy rain on several Midwest states, including Minnesota, Wisconsin, Iowa, Illinois, Indiana, and Ohio. At the same time, the remnants of Tropical Storm Erin triggered deadly flooding in Oklahoma and Texas.

These images are shown at MODIS’ maximum resolution of 250 meters per pixel. Daily images of the U.S. Midwest are available from the MODIS Rapid Response System in a variety of resolutions.

Floods in the Ohio River Valley