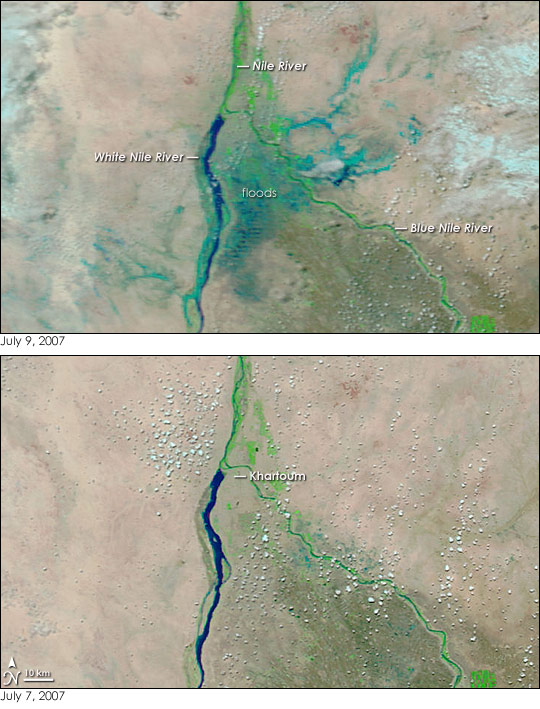 Nestled between the While Nile and the Blue Nile Rivers, Khartoum was just one place hit by floods when heavy rain fell over central, eastern, and southeastern Sudan starting on July 8, 2007. The capital city appeared to be surrounded by water on July 9, when the Moderate Resolution Imaging Spectroradiometer (MODIS) on NASA’s Terra satellite captured the top image. The lower image, taken just two days earlier, shows no sign of flooding. In these images, water is dark blue, the color of the White Nile. Flood-soaked land or mud-tainted water is a lighter shade of blue. Bright green vegetation lines the rivers, an oasis in an otherwise plant-free or sparsely vegetated tan-pink landscape. Cities are typically gray, but the contrast between the desert and city surface isn't great enough for Khartoum to be readily visible in the images.

According to the United Nations Office for the Coordination of Humanitarian Affairs Integrated Regional Information Networks (IRIN), about 20 people had died in floods across Sudan between July 8 and July 10, and 15,000 houses were destroyed. One of the most seriously impacted regions was Umdowoban, located on the eastern outskirts of Khartoum, where extensive flooding is evident in the top image. The Government of Sudan warned that additional heavy rain and floods were likely through at least July 13.